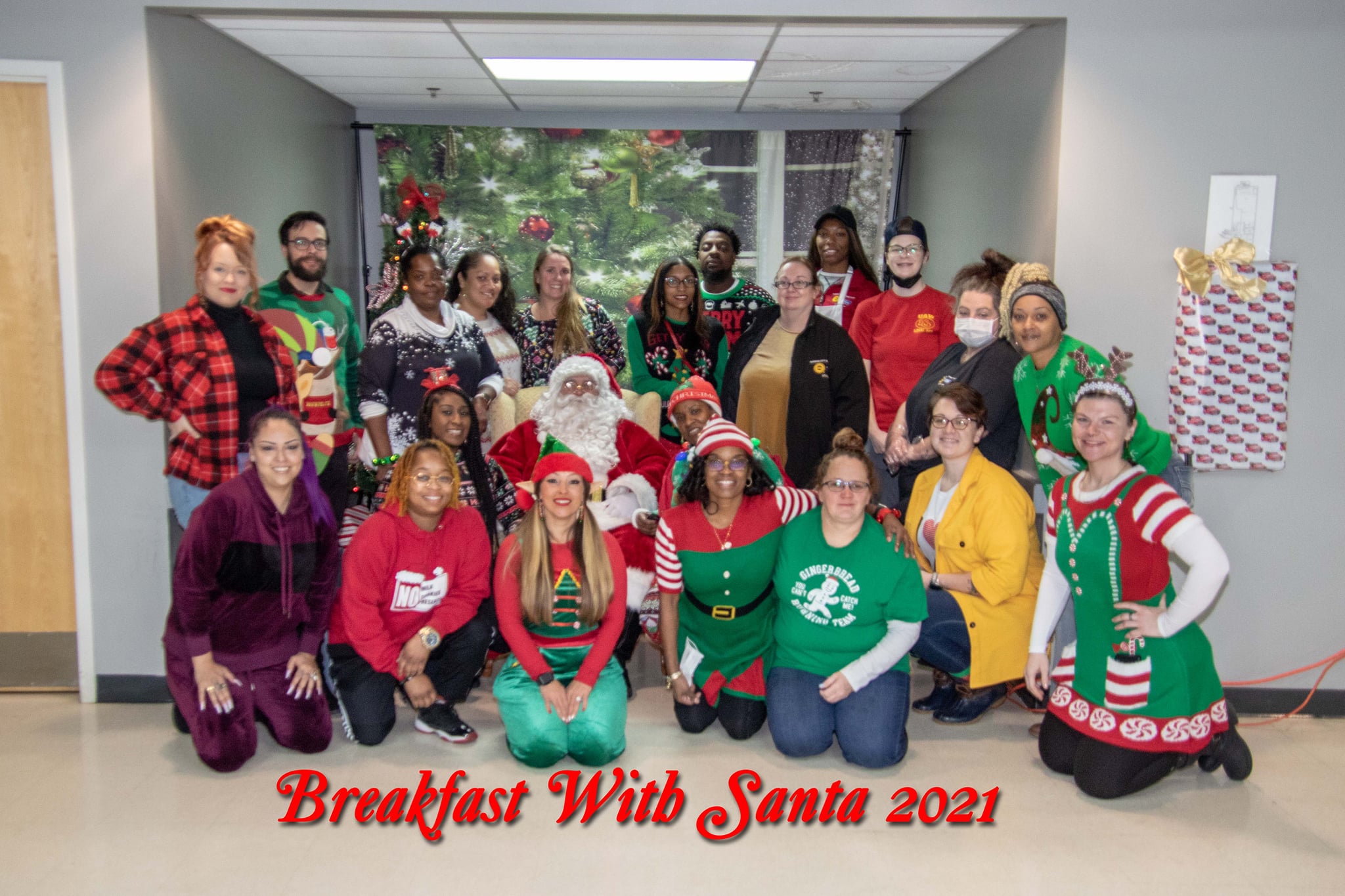 Holly, jolly, billows of fun. The Women’s Committee threw a whimsical Christmas wonderland at this year’s annual Breakfast with Santa. The sweet smell of maple syrup smothered over perfectly round fluffy pancakes, accompanied with a side of sausage and bacon, helped guide the way to the direction of fun. Not one mouth wasn’t watering as soon as they walked through the doors.

The downstairs of the union hall was bustling with children’s laughter and Christmas melodies as it was a nice temporarily transformed from the yeahs and nays of normal union business.

For the last few years, the Women’s Committee had the honor of throwing this event to gather Local 249 union families in celebrating a joyous time of the year. Not only did they have the most delicious breakfast, but they had several arts and crafts for the kids to do after they enjoyed their meal.

Some of the many things to do were to write a letter to Santa, create reindeer food to help provide a snack for Santa’s reindeers on Christmas Eve, or create your own ornament with glitter pens and glitter glue to later put on your Christmas tree at home. There was another station where the child could create an ornament bulb where they can track how tall they were this year to reminisce on later in their life.

While the children were off creating masterpieces, the adults had the opportunity to divert their attention to a friendly auction that had multiple items to bid on. For instance, a beautiful UAW quilt was one of the many items that was provided. It had all the active union committee’s signature logos, perfectly stitched within it. There was an original painting created by one of the union members, and even a spa day basket to name a few.

To add some fun within the twelve standing committees, there was some friendly competition to see who could make the most creative gingerbread house. Oh, how the imagination and creative brilliance came out. Like the true manufacturers that we are. Such determination to identify and promote each committee was not mistaken as each gingerbread house had a unique identification to their home. As the spectators walked by, they were each given a ticket to vote for which gingerbread house that fascinated them the most. At the end of the event the Human and Civil Rights committee was the ultimate winner. Their gingerbread house was a gingerbread village. It even had its own Chiefs football gingerbread stadium. Such an impeccable job.

Finally, and most important, the breakfast wouldn’t be complete if we didn’t invite the big man in the red suit. Santa Claus. Families lined up as their children, with eyes as big as buttons, glimmered at Santa as they waited patiently in line to let Santa know that they have been a good child all year. Beautiful pictures with Santa and his elf were taken to document the magical moment.

“The Women’s Committee hosts breakfast with Santa, to offer an opportunity to bring our membership’s families together for the holidays,” said Nicole D’Andrea, who is a current member on the Womens Committee.

“Although set up and prep can sometimes be stressful and overwhelming, the result is so heartwarming. To me, it adds a little extra Christmas magic to my holiday. I love seeing my union families together. It’s an event that my son and I look forward to every year. This year was an absolute success, and we plan on the event getting bigger and better every year. The more relationships we can create with our membership and their families the better.”

“I love how the Women Committee pulled together as a team,” added Lynn Brown who is also on the Women’s Committee, “I thought overall it was an exciting and successful experience.” Breakfast with Santa was a great turnout.

It successfully invited everyone that enjoys the warm embrace of the holiday spirit. If you would like to volunteer for the next Breakfast with Santa, feel free to contact Robin Taylor, who is the Women’s Committee chair or stop by the union hall for more details. This gathering was one to remember and we are excited to continue this genuine event next year