We have it in us to win if we stick together 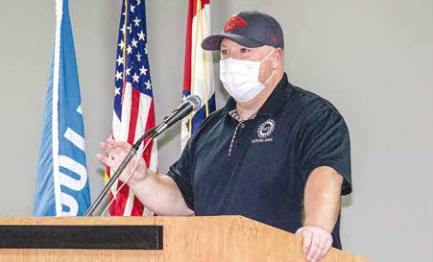 Our Chiefs hit a little bump on the road to the next Superbowl when they lost 36-35 to the Baltimore Ravens on Sept. 19. Our defense had a hard time stopping the Ravens’ running game giving up 251 yards on the ground. Then, down by one point with the clock winding down in the fourth quarter, Chiefs running back Clyde Edwards-Helaire was stripped of the ball just as the Chiefs were getting into position to kick a game-winning field goal.

The result was disappointing, but I’m still looking forward to the Chiefs getting revenge against Tom Brady and the Tampa Bay Buccaneers in Superbowl LVI. Why am I confident? I believe in the Chiefs long-term prospects because Andy Reid and Patrick Mahomes’ strategy for winning is built around teamwork.

What you didn’t see after the loss to the Ravens is Mahomes going on Twitter to point a finger at the defense. You didn’t see teammates turn their backs on Edwards-Helaire on the sidelines or Andy Reid denouncing Steve Spagnuolo in the media. Just the opposite.

“We will never point fingers and say it’s just one person’s loss,” Travis Kelce said after the game. “That is not how we roll at Kansas City.”

That’s not how our union rolls either and it’s something we in the UAW should remember. Just as the Chiefs must face their NFL opponents on the playing field, our union must face Ford management on the plant floor every day and in contract negotiations. It’s not just Ford management that the UAW must fight, either. We are in a constant battle against politicians who’ve sold their souls to big business, the corporate media, political action committees, and think tanks owned by billionaires.

Unfortunately, while the Chiefs stick together both in victory and defeat, we in the UAW are often far too quick to tear each other apart in a public forum when issues aren’t solved quickly enough, or problems arise. The sad truth is, given the wealth and power of the opponents we face, the battles we’re fighting are going to stretch out long after the next Superbowl has been played in Los Angeles.

For that to happen, however, we must remember where our strength lies. Unlike the billionaires and their corporations, our union doesn’t have trillions of dollars at its disposal to buy politicians and hire lawyers. We don’t control the media, the courts, or the police. What we have is each other. Our strength comes from our unity and our willingness to stick together.

We have a lot of issues here at KCAP that have members upset and angry right now. Members are forced to deal with a company that puts profit and production over the safety of our membership. We are dealing with chronic pay shortages and the failure to pay our UAW negotiated SUB benefits in a timely manner during recent layoffs. The company has been slow – as it always is – to deliver on their contractual agreements including the completion of the clothing voucher negotiated locally for our members. In addition, we have been fighting along with International for months to push the company to address our members who have been impacted by the pay leapfrog issue as our temporary members transition to permanent status.

Local 249 members are right to be angry, but some have directed their anger, not at Ford – the party causing the problems – but at the union. That plays into Ford’s hands because it weakens our ability to fight back and fix the problems. In fact, the long-term nature of the SUB issues and pay shortages tells me this is a strategy the company quite consciously employs to divide and weaken us.

There’s no doubt that Ford, GM, and FCA would love to operate in a non-union environment like their competitors VW, Toyota, Nissan located in the “right to work” south. Shedding union contracts would save them billions. There would be no seniority, shift preference, classifications, defined pay rates, full coverage healthcare, clothing voucher, and many, many other benefits we have that are exclusive to UAW members in the auto industry. That’s why weakening the UAW by getting us to fight against each other instead of the company is in their long-term strategic interests.

In August, some members attended the monthly membership meeting to discuss the leapfrog issue that involves new permanent members leapfrogging them in pay even though they had less seniority. Of course, this is unfair. The union has dealt with and fixed this problem several times in the past. Now, however, Ford says it’s unwilling to do the right thing any longer. They could. They’ve done it in the past and the amount of money it would cost to fix it is pocket change to Ford. But they understand that allowing the leapfrog issue to fester causes infighting in the union. It weakens us and that gives them an advantage going into the next contract.

Initially, at the membership meeting, some of the members blamed the union, not the company. Naturally, as in the past, we have filed a grievance and are pursuing a settlement vigorously. But the truth is, it will take our membership coming together on all contractual issues to resolve this matter.

After the membership meeting, Jim Fisher, the Bargaining Committee, and I met for several hours with the members who are affected by the leapfrog issue. Through that very productive discussion, we were able to define the realities of this situation and outline how important it is to work together to hold the company accountable.

These members agreed to take ownership of their membership and use the tools available to them as members to organize support on the shop floor. They have worked to clearly outline their shared perspective in a letter to the UAW Ford Department and how it has impacted their experience as a UAW member and how important it is that this issue is corrected. This display of unity gives the leadership of Local 249 additional power to highlight to the International UAW how critically important this issue is to all members, not just those directly impacted, and that we stand prepared to take all actions necessary to win on this issue.

These members could have adopted a “take my ball and go home” mentality and just blamed the union and given up. Thankfully they recognize that the company is to blame and I’m proud to say that because of that meeting and follow-up meetings, a number of the members who were victimized by the company’s refusal to address the leapfrog issue have recommitted to empowering their union by joining some of our standing committees and get more actively involved in our union. This is a perfect example of how we build the power of this union.

The only way we will fix our issues like Safety, SUB benefits, pay shortages, leapfrog, clothing vouchers, or any other issue is through unity on the shop floor and activism socially, economically, and politically in our communities. We must remember that we are contracted to do specific tasks for the company and yet the very company that is willing to disregard our safety, ignore quality concerns and disrespect our membership is also reliant on us to do more than we are contracted to do to meet their production demands. We must come together and demonstrate to Ford that we are united because when we are united, we are strong. When that happens, they will see that the costs of undermining the union outweigh the benefits.

Just like the Chiefs, we are a team, and we must come together to do our part in the battle to achieve victory because we will be fighting for dignity and justice long after the Chiefs win this year’s Superbowl and hopefully many, many more