The dark art of political deception 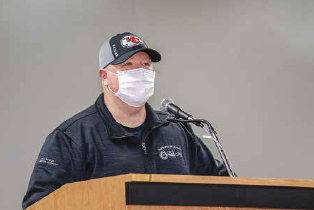 Magicians achieve illusions through practiced deception, according to Penn and Teller. The comedy magic duo has been performing before large audiences since the 70s, so they know something about the art of illusion. Magic, they say, is a form of acting in which the artist presents one reality to the audience while hiding another reality—actions that only the magician is aware of.

While magicians practice deception to entertain us, some politicians employ the darker arts of magic to distract us while they push an agenda that hurts the working class.

In magic, a shiny object, such as a coin, is often displayed to the audience catching everyone’s attention to distract from what the other hand is doing.

In politics, many shiny objects have distracted the attention of far too many in the working class in recent years. Each election cycle there seems to be a new one. Where rightwing politicians once provoked rage — and harvested votes — over Black Americans seeking the right to vote or women asking for the right to control their own bodies, we now see battles over masking and vaccines to prevent the spread of coronavirus or Critical Race Theory that is not even taught in any K-12 school in the nation.

Instead, let’s ask why these politicians use the techniques of magic to present one — false — reality while concealing another.

The main objective is that “politicians want to get reelected, and anger is a powerful tool that they can use to make that happen,” according to a new study by Carey Stapleton at Colorado University in Boulder and Ryan Dawkins at the U.S. Air Force Academy.

But a deeper, and much darker, reason is that if voters knew the real policies these politicians intend to implement or whose interests they were working for, they could never be elected. Here in Missouri, we are witnessing a particularly dangerous and damaging example of this sort of deception.

Our Attorney General, Eric Schmitt, has filed a suit against 45 public school districts across the state, including 12 in the Kansas City area, over policies that require masking to prevent the spread of coronavirus.

These suits come as at least 62 school districts have been forced to close due to the number of teachers, students and support staff who are ill or exposed to coronavirus.

Schmitt, whose children hypocritically attend private schools with strict masking and vaccine policies, has not filed suit against any private or charter schools to date.

Schmitt’s lawsuits have been widely condemned as an abuse of power. They are hurting families — like ours — that must work to pay for housing and buy groceries while scrambling for childcare when schools close because common sense masking policies implemented by locally elected school boards aren’t followed.

School districts are forced to defend these frivolous lawsuits diverting money that should rightfully go to providing quality education and programs to our children.

This comes at a time when Missouri ranks low when it comes to paying teachers, and lags far behind national averages. Teachers in Missouri make on average $50,817, which ranks 45th in the country for teacher pay, according to 2019-2020 data from the National Education Association.

An audit by Missouri Auditor Nicole Galloway reveals Missouri provided about 32% of state aid to K-12 public schools in 2020 – ranking Missouri 49th in the nation. That means mainly local sources, like property taxes, are picking up the rest of the tab – or cutting some educational programs.

“Next fall, we aren’t going to have any teachers,” warns Jessica Piper, a teacher, rural farmer and public-school advocate who is the Democratic candidate for Missouri House District 1.

Schmitt and others distract us with talk of freedom and liberty to disguise the fact that they are working day and night to push their real agenda to privatize public schools. They attack teachers and teacher unions with phony talk of Critical Race Theory. Why? Because they hope we are stupid enough to fall for their tactics as they work to privatize our collective public institutions for the gain of their corporate masters.

Missouri House Candidate Jessica Piper is particularly concerned that the defunding of public schools — which is the point of all the attacks on Critical Race Theory – will hurt rural districts hardest because no one is placing a private or charter school in rural areas. Once rural schools close, teachers leave to find jobs and the small-town economy collapses. Next, the grocery stores and gas stations board their windows and people move away.

The only question this time is if we’ll wake up to the stale old trick of outrage politics and see through the deception in time to save our schools and other public programs that we value in our communities.