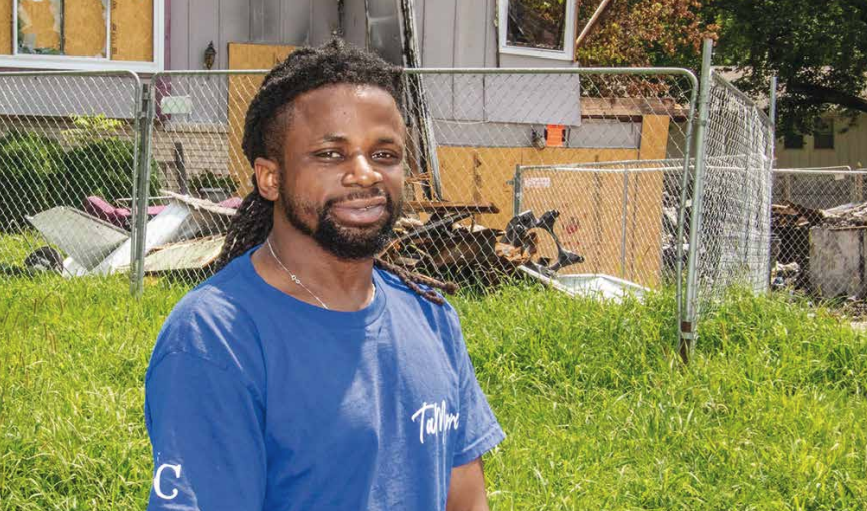 Terrae Porter presents as your typical happy-go-lucky guy, he is polite and cheerful and happy to carry on a conversation. You would never know that only weeks ago he experienced what many of us hope we never have to and made a choice no one wants to make.

Porter, a TFT for the last year at the Kansas City Assembly Plant, came home to Raytown after a long day working in the Transit Body Shop, having no idea how his night would end. Porter’s cousin attempted to convince him to go out for the night, but after getting cleaned up and relaxed Porter decided he “wasn’t going anywhere” and went to tell his cousin just that.

Within moments of coming downstairs Porter heard a resounding boom that shook his whole house. He looked out the window and saw the neighbor’s garage door laying in the street. “It didn’t even look like a house anymore,” stated Porter who quickly got dressed and grabbed his mask. “I don’t know why I grabbed my mask, I guess in my mind I already knew I was going in if I had to and it just seemed right.”

Porter and another neighbor rushed to the scene of the explosion, quickly realizing there were people still inside they knew they had to help. The pair risked life and limb rushing into the hollowed-out carcass of what was once a home as they raced against time as the fire spread around them. They were able to locate two children, lifting them from the rubble and handing them to neighbors gathering outside. The children cried for their mother who was still somewhere inside.

At this point the flames were beginning to move quickly through the destroyed duplex, and they almost missed the woman, Erica Williams, partially buried in the rubble. She kept saying, “just go, leave me, just go.” Porter said, “There was no way I was doing that! There was tons of debris on her and we had to yank her out from under everything. She said she couldn’t walk, and she was pregnant, so we had to pretty much carry her out.” By then emergency services had arrived and were starting to take control of the situation. A second huge boom followed by what appeared to be fireworks followed soon after.

Their timely rescue efforts had most certainly saved lives. Williams had a broken back and a broken leg, and her three-year-old son had sustained two broken legs. Others involved received minor injuries and were being treated on the scene.

Porter, an asthmatic, did a breathing treatment but was otherwise considered fine. Still on an adrenaline rush from the events of the evening but afraid of missing work as a TFT he contacted his committeeman Dave Orr and told him what had happened.

He ended up making it to work a day later but said that he was still dragging, his mind replaying all the events that had taken place, almost as though the shock of it all was delayed in setting in. It took some time, communication, and effort but Porter was able to process the danger he had been in as well as the full impact of what had taken place some time later.

“I got a lot of closure afterwards and that helped. I spoke with the sister of the lady I saved, and she gave me a huge hug and told me that her sister was already up and walking. I ended up going to the service for the man who didn’t make it and saw the lady I helped save and she thanked me for not leaving her behind. That was good closure,” Porter shared.

Porter, a humble man, claimed that “God put me there for a reason,” taking little credit for his own act of bravery. We as people hope we are never put into the kind of position to have to make that kind of decision, and we hope that we make the right one if we are.

Porter showed that not only was he the kind of man to step up and help in a situation, but he also risked his own life for the benefit of others. His commitment to doing the right thing in the face of insurmountable odds marks him as a real-life hero walking among us here at UAW Local 249.