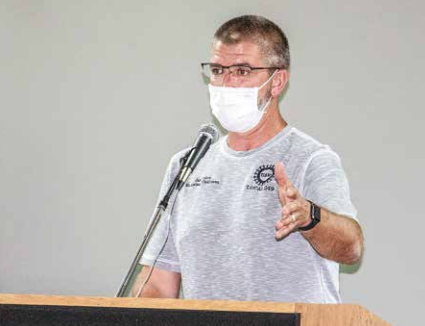 During the month of September, our members continued to experience down weeks due to parts issues. As we start to head into October and the beginning of the fourth quarter of the year. There is nothing to indicate that these issues are over. Our parts supply base is still appearing to be very soft. During normal operations, we can forecast production schedules months in advance. Currently, the production schedules are basically week by week.

The local has been meeting with the company on a regular basis to ensure we are able to work as many of our members as possible during these down weeks, as our priority is to keep as many members employed as possible.

During these down weeks Labor Relations continues to show no competence in paying members correctly. For the week ending on September 12, the company had a scheduled holiday for Labor Day on September 6. Most members were not eligible for the holiday pay due to the down weeks. However, KCAP’s Labor Relations Department did not remove the holiday code in the computer system. Once SUB Payments were sent for processing the payroll department identified the holiday code and rejected members SUB payments. Only once this was caught by Local 249 were SUB payments resubmitted to payroll and the pay process was restarted.

Even when members have returned to work, we continue to have issues with management on the floor paying members correctly. Everyone needs to be checking their DROT’s daily, and if there are issues with your pay make sure you are notifying your process coach and District Committee[1]man as soon as possible.

We have spoken with several other locals and are finding the same issues in other plants as well. This can only lead us to believe this is being done intentionally. Ford needs to recognize the past 18 months have been hard enough on our members with uncertainty to work schedules and down weeks. KCAP management can only look at themselves in the mirror for their manpower shortages when the starting wage is not competitive with the other companies in the industry and those that are working can’t get paid correctly.

We have seen an increase in terminations of members on the charge of a 10-day quit. If, you’re going out on a medical leave or extending a medical leave it’s very important all your documentation is turned in a timely manner. If you are having issues with Unicare make sure you’re in contact with our Benefit Representatives at the union hall.

Finally, I want to thank all our members for your hard work and dedication you have all shown so far this year. There have been many hurdles we have all had to climb, but we have made it through everything so far. There are several more upgrades and significant investments coming to this plant over the next few months. Our plant is receiving a lot of attention for all your hard work. All these are made possible by a membership that comes to work and makes our plant the success it is.