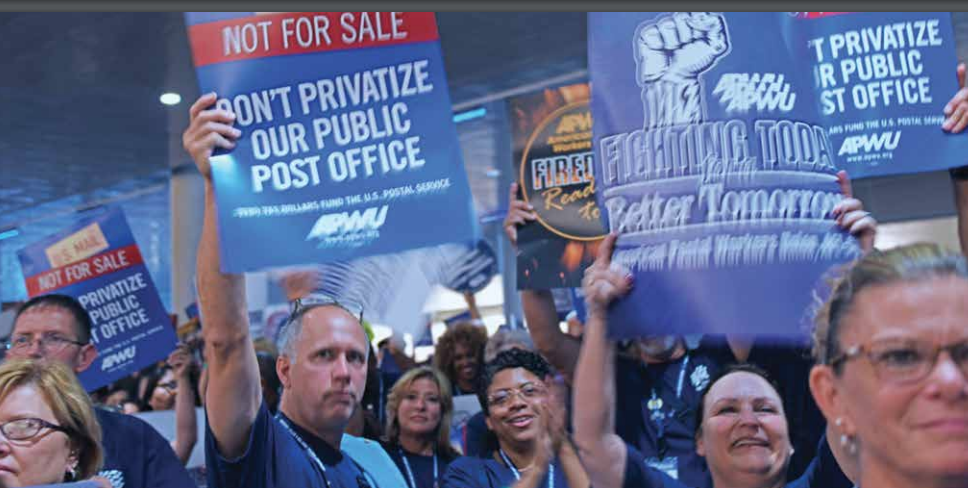 Postal Service privatization a danger to us all

The United States postal service has been in the news a lot lately. A name you may have heard regularly is Louis Dejoy. The 65-year-old CEO of Breed Logistics is the current head of the USPS. What people may not know is he is the first postmaster in two decades without prior experience in the USPS. Yet, his companies still hold active contracts with the United States Postal Service. This may seem like a conflict of interest to the working class because to the corporate class it’s their only interest. As head of the USPS, Dejoy also is the boss of the union workers In the American
Postal Workers Union. The APWU negotiates for 200,000 retired and active members. In 1970 Postal workers won collective bargaining rights after a national postal strike, later in 1971, five separate Postal workers unions merged to form the APWU.

As Dejoy took over his position as Postmaster general the fight to privatize the USPS gained momentum. Companies like United Parcel
Service, Fed-Ex, Amazon, Walmart XPO Logistics are fighting for control of the coveted markets the USPS currently hold. Many of these companies already rely on the USPS to deliver to rural areas and hard to reach destinations. The reason for this is that USPS is required by law to deliver to every citizen in the United States. This is infrastructure prebuilt for the large nonunion conglomerates that they view as cost saving to the bottom line. Those savings aren’t passed on to the customers or employees but to the shareholders.

Privatization of the Postal Service is a danger to every unionized auto worker in America. The USPS employs 73,000 Veterans in high paying union jobs, making it one of the nation’s largest employers of service members. The Postal Service is one of the leading employers of minorities and women, with minorities comprising 49 percent and women comprising 46 percent of the workforce. 21 percent of employees are African American; 8 percent are Hispanic; 8 percent are Asian-American/Pacific Islander; and 0.67 percent are American Indian or Alaska Native. The USPS also employs 35,000 differently abled people and 10,000 differently abled Veterans. The average pay of a Postal worker is 61,000 dollars a year compared to the average salary of a non-union worker in FED-EX, which is 35,000 dollars a year. If privatization takes hold of the USPS, then wages are cut in half, communities impoverished, benefits lost.

One of the reasons we hear so much about the privatization of the United States Postal Service is due to the low cost of shipments compared to the for-profit parcel companies. One of the major reasons is The Postal Accountability and Enhancement Act (PAEA) required the USPS to create a $72 billion fund to pay for the cost of its post-retirement health care costs, 75 years into the future. This burden applies to no other federal agency or private corporation. The bill was introduced in the United States House of Representatives by Tom Davis, a Republican from Virginia, and cosponsored by Republican John M. McHugh of New York and Democrats Henry Waxman of California and Danny K. Davis of Illinois. As the chair of the Senate Oversight committee, Senator Susan Collins of Maine shepherded the bill’s passage through the Senate. The bill was approved during the lame duck session of the 109th Congress, and approved without objection via voice vote.

PAEA was the first major overhaul of the United States Postal Service (USPS) since 1970. It reorganized the Postal Rate Commission, compelled the USPS to pay in advance for the health and retirement benefits of all of its employees for at least 50 years, and stipulated that the price of postage could not increase faster than the rate of inflation. It also mandated the USPS to deliver six days of the week. According to Tom Davis, the Bush administration threatened to veto the legislation unless they added the provision regarding funding the employee benefits in advance with the objective of using that money to reduce the federal deficit. When he signed the bill on December 20, 2006, Bush issued a signing statement that said that the government can open mail under emergency conditions, though Waxman asserted that the government cannot do this without a search warrant. This sounds good on paper, but it is setting the stage to bust the union and lower wages just to let the rich get richer.

As the United Auto Workers now elect the International executive board directly, voting by mail has become the standard. In the one member one vote referendum nearly 85 percent of autoworkers didn’t vote. When done correctly, voting by mail has been proven to be one of the safest ways to practice our rights to choose our leadership. Protecting the USPS should be on the forefront of every autoworker’s mind. If not, we could face dire consequences in the form of corporate interference, mismanagement to make profit, Low paid apathetic workers, the shedding of nearly 200,000 union jobs, not to forget that the USPS employs the largest number of vets, women and minorities in America. The war on the United States Postal Service is a war on the working class.