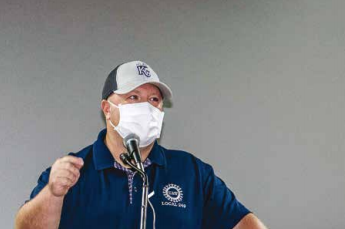 I think all of us are looking forward to the Chiefs regular season. With the high-power offense that Andy Reid and Patrick Mahomes have brought to Kansas City we’ve already won our first Superbowl since Len Dawson led the team. True, we lost to Tampa last year, but the newly revamped offensive line promises to unleash Mahomes and the Chiefs to do what they do and take us back to the top this year.

Excited as I am about the upcoming season, when I think about our union, its members, and the working class as a whole, I can’t help but remember the Chiefs of old. In those days, the Chiefs often got ahead on the scoreboard and would go into prevent defense and try to run out the clock. Time and again, our opponent would come from behind to score a touchdown or kick a field goal to go ahead just as the clock was ticking down in the fourth quarter.

If you think about it, that’s what we — and I mean all of us — are doing now. Unions are playing prevent defense and we are losing.

Back in the day the UAW was on the offensive. We not only organized the auto industry from parts to assembly, we helped the teachers unions get their start. We backed Cesar Chavez and the Farm Workers in the battles to organize the fields. We were a driving force in the fight for civil rights working closely with Martin Luther King to organize the March on Washington.

When we played offense, we won. Wages went up. Working conditions improved. Our members got health care and pensions.

And it wasn’t just us. What the UAW won for its members became the standard for workers in all industries. When we fought for and won a wage increase, that wage increase was quickly adopted across the board.

Unfortunately, once those great victories were won, like the Chiefs of old, we started playing prevent defense. Instead of pushing forward, we tried to hold on to what we had.

The truth is, we’ve been playing prevent defense for nearly 50 years and the result has been disastrous. Wages in inflation adjusted terms have declined. Defined benefit pensions have been replaced with 401k plans. Retiree health care for members hired after 2008 has been lost. Solidarity among our members has been weakened by the introduction of tiers and temporary workers who make less, have fewer benefits and less protection on the job.

This is not just a problem for our union. Union membership in the U.S. has declined to the lowest levels since the 1930. The middle class — a product of the great union victories of the past — is in decline. The workers at America’s largest most powerful corporations now barely survive on low wages.

All of the blame for this does not rest on the shoulders of the unions. We are, all of us, the victims of a coordinated campaign to reverse the gains of the New Deal by billionaires, their corporations, think tanks and politicians.

In football terms, we’ve taken a hard hit. Now it’s time to get up, shake ourselves off and get back on offense. In union terms going on offense means going back to the organizing model that won the great victories of the past.

It means rejecting the defensive service model that we’ve fallen into under the corporate onslaught of recent years.

What is the organizing model? It means relearning the lessons that won the great victories that brought the American Dream in reach of working people for the first time. It not only requires reorganizing the auto industry from parts to assembly, it also means reaching out to unorganized workers in other industries. It means rebuilding the union power required to win by increasing our numbers, not just in auto, not just in manufacturing but across all industries, including service industries that now employ the largest share of workers.

What about the service model of union organization? That model confuses members about what unions really are. They come to think of the movement — which requires the active involvement of all of us — as a just another service they pay for. Like their cable TV bill. The defeatist service model has led — and will continue to lead — to the erosion of wages, benefits and living standards for all workers.

And the bad news is, unlike a football game, the clock doesn’t stop at the end of the fourth quarter. The game doesn’t end. The erosion of our living standard won’t stop until we stop it.

Things will get worse until we go back on offense. Unlike football, the labor union movement isn’t a spectator sport. It requires the active participation of all of us to win.