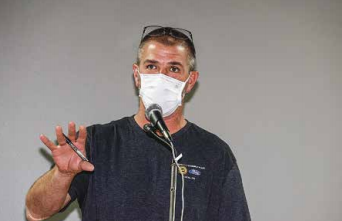 The month of August has been challenging to say the least. The Transit System has seen a full production schedule, while the Truck System has been down for two weeks due to parts shortages. For a short time, it appeared that KCAP was getting past the parts issues, but unfortunately the they seem to have become a problem again.

We are fortunate to produce two very high demand vehicles for the company and remain a high priority for parts. I expect now that we could see scheduling adjustments remain for the next couple of months.

KCAP is the largest square footage assembly plant in the world and runs two separate assembly lines. While a National Contract does allow for a rotational schedule the reality is this would leave several departments without skilled trades coverage unless hundreds more skilled trades members were added.

What I hope everyone saw was that when issues are addressed with both the Union and the company sitting down and having serious conversations, that issues can be resolved. Through these meetings an improved plan for preventive maintenance was developed, and a schedule that gives our facility the best coverage.

I want to thank all our skilled trades members for their patience while these meetings were taking place. I know there were a lot more questions than answers while we were meeting, but you all know sometimes these issues take a lot of meetings before a resolution is reached.

I also want to personally thank Scott Pyle, our skilled trades bargaining representative, and our skilled trades district committeemen for their professionalism during these talks. The result has helped our plant going into the future.

On a final note, I want to talk about the plant going forward. KCAP is currently undergoing several significant upgrades to the facility. There are a lot of very positive things happing, not only for our members, but the community. Thousands of people’s jobs are affected by the way this plant operates.

I know everyone has been through a lot over the past 18 months. No one could have ever imagined what our members have had to go through. We have seen the worst of a global pandemic and world parts shortages, our members have had to wear masks in 100-degree heat because Ford won’t provide air conditioning, and we have seen a complete failure from a company that don’t seem to know how to clean the plant. There are currently several issues we are working on getting the company to improve upon.

Our members continue to work through these issues and do a remarkable job every day. However, the absenteeism from our members must improve. We can’t represent people who don’t come to work. One of these days we will be past COVID, and parts shortages and things will return to normal.

The future of this plant remains very bright. However, as we look for additional expansion and growth in membership, we must not let plant absenteeism delay or cancel the positive strides we are making.