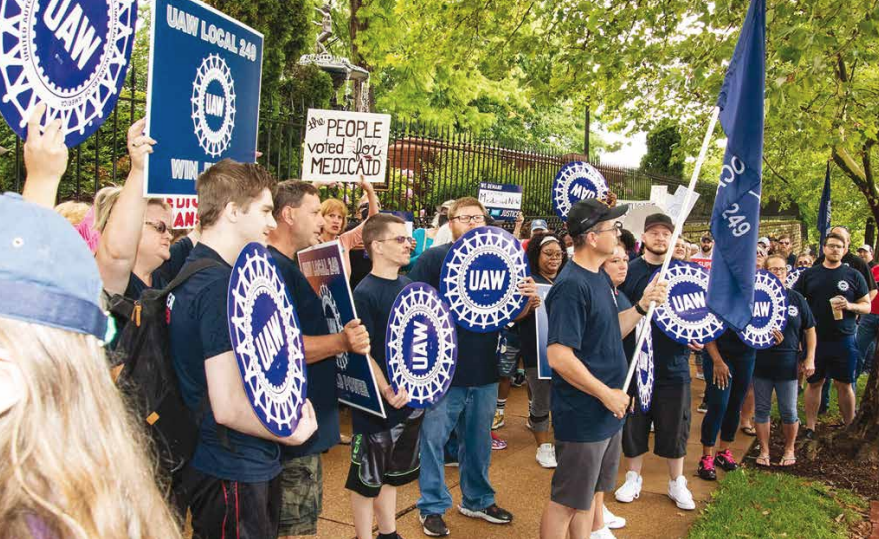 Demonstrators, including a large delegation of Local 249 members, traveled to the governor’s mansion in Jefferson City July 1 to deliver emails and transcripts of voicemails begging Gov. Mike Parson to fund Medicaid expansion and save lives.

The governor and his Republican allies in the legislature have so far refused to fund Medicaid expansion even though a majority of Missouri voters approved Amendment 2 expanding Medicaid eligibility in Missouri in 2020.

Just as Parson ignored the will of the people in refusing to fund Medicaid expansion as required by the Constitution, he has refused to respond to citizens who call or write him to do his duty.

Demonstrators planned to deliver hundreds of those e-mails and voicemails to Parson during the demonstration, but the governor was not in.

Thats when Pastor Jon Stratton came to the mike to announce that Parson was holding a news conference five blocks away at MoDot headquarters.

“Instead of delivering to his big, tax-payer funded mansion,” said Rev. Stratton, were going to go see him where he is.” With that, the crowd moved toward the building where the governor was holding his news conference. Still, the governor and his aides refused to allow Rev. Stratton to deliver the messages.

That’s when the crowd surrounded the building, covering all the entrances so Parson could not leave without coming face to face with the demonstrators.

A long standoff ensued with the demonstrators unwilling to leave until the Parson received the box containing the messages and the he was unwilling to come out and face the crowd in order to move on to his next appointment.

Finally, an agreement was reached, Rev. Stratton was allowed to deliver the messages and the demonstration ended.

Parson still may not read the emails or transcripts of voicemails, but the message that Missourians are angry at the governor for his betrayal of the voters was delivered nonetheless.

“Today should be the day we are celebrating,” the Rev. Kris Avise-Rouse told the crowd, “the day Missouri voters decided to put in our state Constitution that Missouri would finally expand Medicaid to more the 275,000 of our neighbors across the state.

“But the man who resides here, who claims to uphold the law of the land, the will of the people, lied. After the voters spoke, he said to the media and to us that expansion would be fully implemented.”

Then he broke his promise to Missouri voters and blocked their constitutional right to Medicaid expansion. “

Just because we don’t want to pay for heart attacks doesn’t mean they don’t happen,” said Dr. Heidi Miller, Medical Director of St. Louis Regional Health Commission and Primary Care Doctor with Family Care Health Centers. “We have wasted time in denial, circling between the myths of telling our patients – ‘You’re not good enough for Medicaid’. But by wasting time, wasting the truth, we have wasted lives.”

Rev. Dr. Emmett Baker, one of the Medicaid 23 who was arrested for sitting in at the Capitol to demand Medicaid expansion said his daughter’s life could have been saved nine years ago by Medicaid expansion, which failed in the state 10 years ago.

“We have people all over this state who are dying simply because we don’t have Medicaid expansion,” Baker said. “It is estimated that approximately 700 people a year in Missouri die because they don’t have healthcare.”