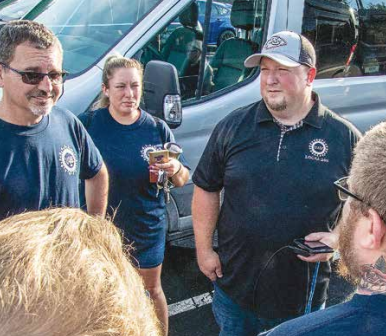 The Missouri Supreme Court delivered a stinging rebuke to Gov. Mike Parson and the Republican super majorities in the House and Senate July 22 when it ruled that the state must expand coverage to approximately 275,000 low-income people. The decision reversed a lower court’s ruling that found the amendment approved by voters last August to be unconstitutional because it did not include a revenue source for the state to pay for the Medicaid expansion.

Although it took the Supreme Court to resolve the issue, our members can be proud that UAW Local 249 has been in the fight from the beginning and, truth be told, our members played one of the biggest roles in the fight at every stage of the battle.

Local 249 members were there at the beginning circulating petitions to get the constitutional amendment on the ballot. Many organizations, including the UAW, submitted nearly 350,000 signatures to place Amendment 2, Medicaid expansion on the ballot.

That failed. Medicaid expansion was passed by Missouri voters with 53.27% voting to extend eligibility in Missouri to adults that are between the ages of 19 and 65 whose income is 138% of the federal poverty level or below — about $17,774 for a single person.

With the voters having expressed their support it was expected that Republicans would finally do the right thing — that was naive — they still had plenty of cards up their sleeve.

In the last session of the Missouri legislature, that just ended, Republicans demonstrated that they care nothing for what the voters want. They don’t feel bound by the state’s constitution. They simply used their super majorities to block funding for expansion.

Gov. Mike Parson went along with the charade claiming that his hands were tied.

At that point public pressure was brought to bear. Local 249, Jobs with Justice and other supporters of Medicaid Expansion mobilized to confront Parson at the governor’s mansion in Jefferson City on July 1.

Three weeks later, the state Supreme Court ruled that the Department of Social Services and Missouri HealthNet, who are responsible for the administration of Medicaid in Missouri, are required to use the funds appropriated by the legislature on all eligible recipients under the adopted amendment.

Apparently, that court still believes the ideals outlined in the Declaration of Independence — that “governments are instituted among men, deriving their just powers from the consent of the governed” — still stand.

There are some important lessons in the Medicaid expansion fight that all working people should absorb.

Although we are largely on the defensive — with all the power of monied interests arrayed against us — we can still win important victories if we are united with our allies in the trade union and social justice movements. With our friends, we brought the strength and power of our membership to bear.

The fight was long and hard, but in the end, we won