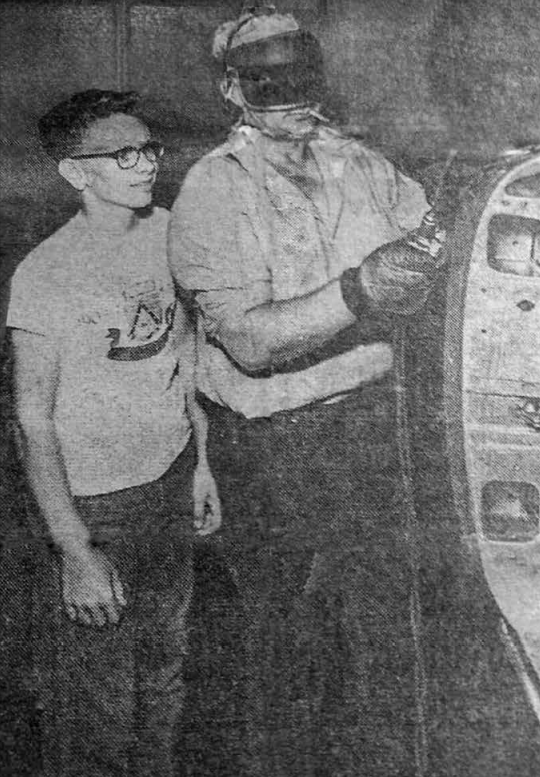 Michael Henze is a third-generation autoworker, with roots that run so deep they remember what it was like to work at when there wasn’t a union in these shops. His family’s stories of a time before the union came to be, combined with Henze’s own life experiences prior to being a UAW member pushed him to get involved when he started at the Kansas City Assembly Plant.

In 2013, Henze was plagued by sleep apnea in which he would stop breathing while he was sleeping. The episodes were so severe that if the need arose, he wouldn’t even be able to function enough to call 911. He was considered “high risk” as a patient and no insurance companies would cover him. Living alone, this meant everyday he wondered if this would be the day he went to bed and didn’t wake up the next morning.

He managed to get a referral to try and get a position with Ford Motor Company after doing some plumbing work for a UAW pipefitter. He got the job and within a year he was in material handling with a hi-lo bid. Henze said that was “unheard of” before the mass hirings in 2013. “I was a plumber before I came to Ford, which is the same thing as a pipefitter in here. They needed skilled trades help and I was fortunate enough to get interviewed and get a slot.” This enabled Henze to get health coverage and a life-saving surgery that he otherwise wouldn’t have had.

That alone should be enough to instill a sense of gratitude in a person, but Henze had his uncle’s and grandfather’s stories to help humble him along the way as well. His uncles worked for GM at Leads and Fairfax over the years and his grandfather worked at a plant in St. Louis before coming to work at both the 12th & Winchester Plant and the Kansas City Ford plant before retiring in 1969. Henze’s grandfather said, “before the union, my job wasn’t worth having.” It didn’t make sense to Henze at eight years old, but years later it all made sense.

The idea of a scheduled hours, vacation and overtime, breaks or even an opportunity to go to the bathroom were only dreamed about in those days. Henze’s grandfather told him that in those days if you had to use the restroom you would get the attention of the foreman and ask to go, and he would walk you to a window where you’d see a line of people on the sidewalk to get a job. “If you can’t keep working, one of those guys down in that line would be happy to take your job,” the foreman would tell you. And so, you would hold it and go back to work, eventually he would get a coffee can to use while working on the job just to get through his day before the union came along.

Henze now felt a sense of pride in continuing in his father and grandfather’s footsteps and felt a duty to get involved in the union to do his part in keeping the legacy alive for future generations. This was only amplified after watching “Brothers on the Line” during orientation when he started.

“All these different things came together. I came in and got the job, I got my surgery so I could live without fear of dying. Then the talk around the shop was about the two-tier system and why it was there so I was told to talk to my committeeman to get involved.” As it turned out, Henze’s committeeman at the time was Jason Starr, now President of UAW Local 249. “It was like some alignment of the universe that he ended up being my committeeman. He opened us up to why things were this way and pushed us to ask ourselves ‘What are we gonna do about it?’”

Henze started by getting involved in the fight against Right to Work attending rallies, going to Jeff City and talking to others in the plant about why it was wrong for us. He helped the Fight for $15, worked on the CAP committee, walked the plant for signatures to stop Right to Work, served as alternate committeeman and more.

“After I realized how much my family had prospered because of the UAW and Local 249 in particular, you know, that was my motivation to try to be involved in putting something back into it. I came in and didn’t want to be political but to be union is to be political,” Henze said.

“It’s an opportunity to put back into something that has helped my family for three generations, now four generations with my cousin working here, and my son for a short while. You never know, maybe a fifth generation will come along that wants to work here. I want to keep this a viable lifestyle for more families and more people to come and have a good livelihood and be able to go to the doctor.”

It wasn’t until Michael Henze came to work at UAW Local 249 that he truly understood how much the union had changed his life before he’d even been born. His grandfather’s union job allowed him to afford a place on the lake, half of his dad’s university tuition, a nice home and union benefits and wages. “There’s no telling how our lives would have turned out without being union,” he shared.

The story of Henze and his family is one that shows the long-lasting impacts unions can have on the lives they touch. The benefits and opportunities afforded to us as members of this great union allow us to provide a lifestyle and a livelihood to our families that can last for generations. It is important to get involved and stay involved, so that the stories like those of Michael Henze’s grandfather and uncles aren’t lost to time, and their sacrifices hold meaning. The fight may look different today, but the strength and courage it requires is still the same.