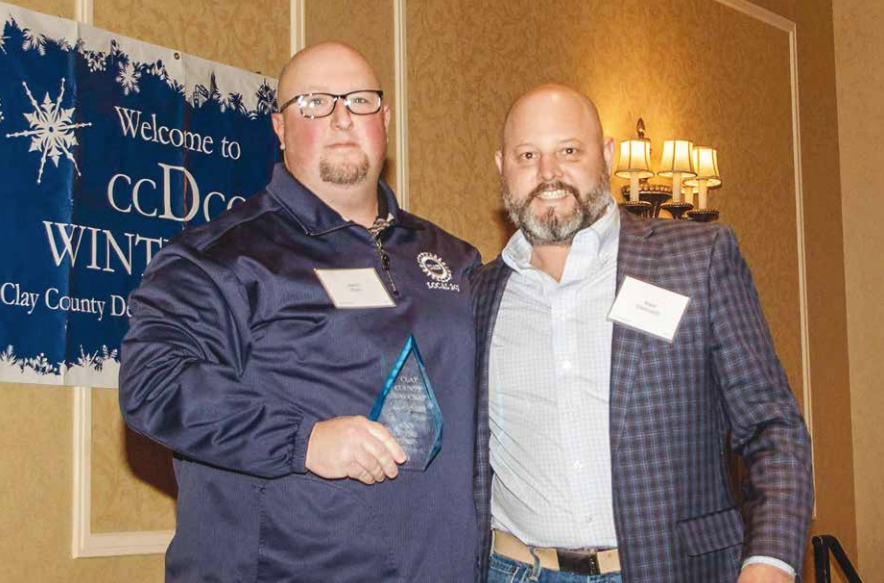 Local 249 President Jason Starr was named Man of the Year Feb. 26 by the Clay County Democratic Central Committee at the party’s Winterfest Celebration at Harrah’s Hotel in North Kansas City. The award was presented by Mo. State Rep. Mark Ellebracht who represents Liberty in the Legislature. The crucial role in promoting working class policies, candidates and elected officials was reflected in other awards presented at the meeting, as well. Jay Bosler, chair of Local 249’s CAP Committee, was named Labor Liaison by former State Rep. Jon Carpenter, who now serves on the Clay County Commission. CAP is the union’s worksite political-legislative action arm.

CAP supports candidates who support and fight for working people. The CAP committee assists in voter registration and get-out-the-vote drives, dollar drives, letter-writing campaigns, and publicizing the issues and positions of public officials.

Sherry Duffett, the wife of retired Local 249 millwright Larry Duffett, was recognized for her work with the True Blue Award which was presented by Mo. State Sen. Lauren Arthur, who represents Clay County in the Legislature.

Local 31 President Clarence Brown also attended the event. Kansas City Mayor Quinton Lucas, who delivered the keynote address, gave a shout out to the contributions of Local 249 activists for their hard work in supporting working class candidates and community service.

“It’s time we recognized essential workers – the ones who did the real work during the pandemic – teachers, bus drivers, nurses, city water and sanitation workers, and yes, autoworkers for keeping the country running,” Lucas said. “They deserve our respect.”

In accepting the Man of the Year Award, Starr thanked his family for supporting him when he had to spend long hours away, working nights and weekends, on behalf of Local 249 members, Region 4 Midwest CAP and the working class as a whole.

As chair of the UAW’s Midwest States CAP, Starr plays a key role in identifying and supporting candidates and elected officials who will champion worker rights at the local, state and national level.

“We aren’t interested in party labels,” says Starr. “The UAW is working to turn around decades of attacks on working families. We will work with anyone – Democrat, Republican or Independent – who will stand shoulder to shoulder with us in the battle to defend worker rights, raise living standards for all workers and preserve on the job safety.”

Lucas Kunce and Scott Sifton, both candidates running for U.S. Senate in the Democratic primary election to be held Aug. 2, spoke at the Winterfest luncheon.

Kunce is a Marine veteran, Missourian, and Democrat running for U.S. Senate. His platform calls for investment “here in the heartland, through a Marshall Plan for the Midwest to rebuild forgotten communities, create the next generation of energy jobs, and bring power back to American workers.”

Sifton served as a member of the Missouri Senate for the 1st district from 2013 to 2021. In the Senate, he led a record 40-hour filibuster of an amendment attacking marriage equality. He also fought to ban lobbyist gifts to legislators, expand Medicaid and protect victims of rape, domestic violence, and sexual abuse.