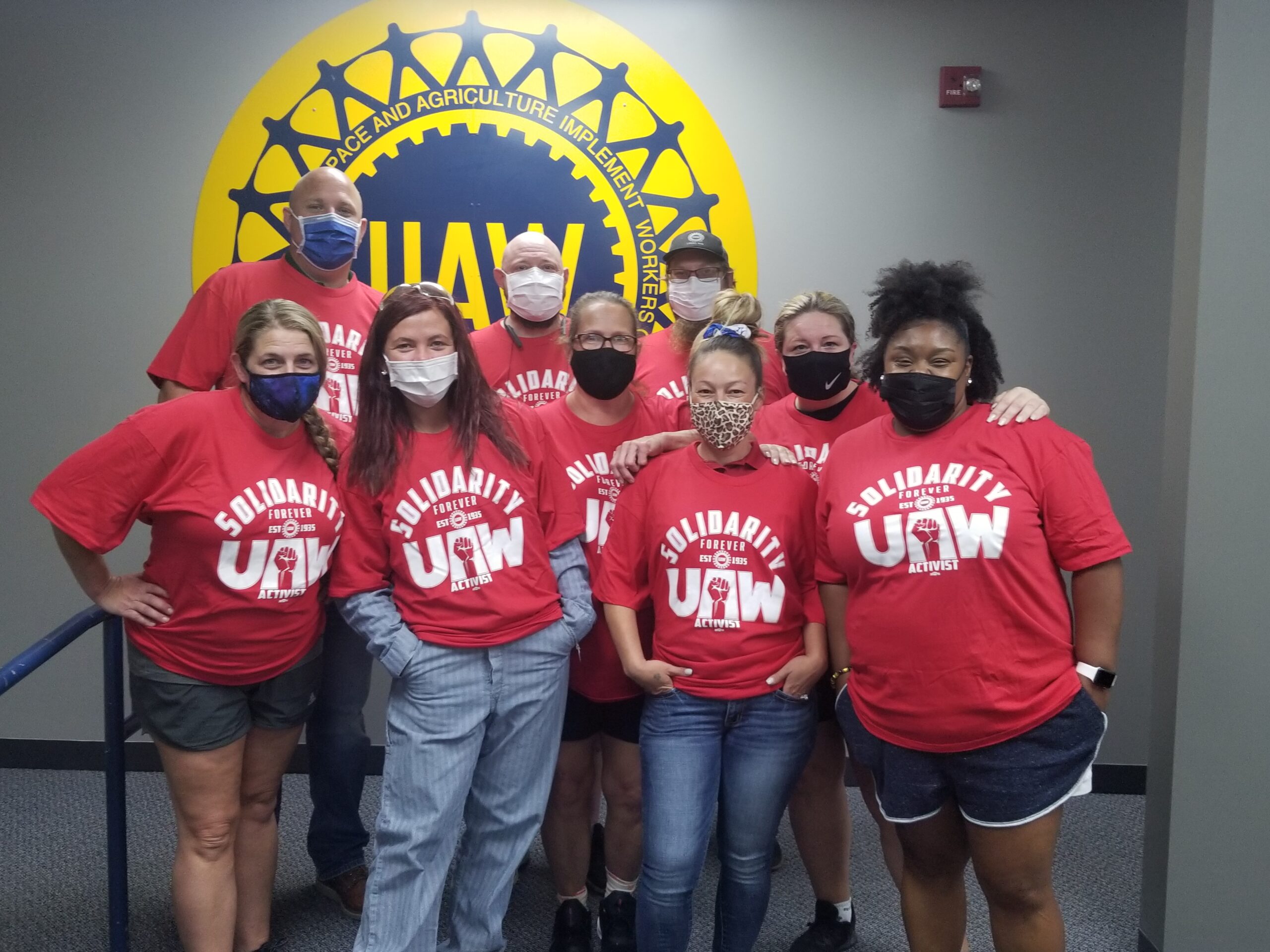 This month Local 249 is honoring those who donate 25 dollars or more, to V-CAP. The CAP Committee has been on a plant wide mission to find and deliver shirts to everyone who has donated at the Directors’ Club level. There are three levels of donations you could choose but anything is appreciated. The first level is called the Century Club; those members donate $8.50 or more, every month. The second is the Directors Club which is a $25 donation monthly. The third is the Platinum Club where members donate $50 or more each month.

‘’When I was hired back in 1995, they were asking for CAP donations in the amount of a quarter, I said I can give a dollar so, I gave a dollar,” said Shirley Mata, chair of the CAP committee. “I gave it because they said it goes to help the union, But the education on exactly what that money went for and why it made a difference, wasn’t there like it is now.

I give over $55 a month especially now that I am so involved. I see what that money really does and what a difference it makes in our communities, and in the type of politicians we’re able to get elected.

The importance for me is that these dollars go to support candidates that support collective bargaining whether Democrat or Republican, which gets us better contracts. Thanks to a Democratic Governor and a bi-partisan committee composed of both Democrats and Republicans, our plant was saved when they were going to close it down. Our CAP dollars were significantly involved in saving our plant.

Being CAP Chair, we’ve tried to make sure that people are educated and that this isn’t a Democrat versus Republican thing. Yes, more Democrats are given money but it’s because they are willing to support collective bargaining.

The one thing I learned when I came in was that our Union was born out of politics. We have a union that gives us medical, holidays, great pay and time off that we can spend with our families and without the union and collective bargaining that wouldn’t happen, without our CAP dollars that wouldn’t happen.”

“Most of our members don’t realize how deeply politics affect our collective bargaining process. Trade policies, taxation policies, everything impacts our ability to negotiate at the collective bargaining table”, Local 249 President Jason Starr explains. ‘I think that’s where the disconnect happens for most members as to why we are so directly engaged in politics. They think it’s just a fight between the UAW and Ford and it’s not. It’s a multifaceted battle and politics are the greatest threat to our survival”.

“The reason I give so much is because I understand and realize what our dollars are going for,” said Jay Bosler, co-chair of the CAP committee.

“They go towards electing people that support the working class, people like myself and my co- workers.

I also understand that our CAP dollars don’t only go for electing officials but also to support programs within Region 4 area such as social programs, women’s shelters, veterans programs and lots of other community based programs. In fact, in Liberty, there are two of the oldest cemeteries in Clay County and they have found over 700 unmarked graves that belonged to former slaves that were buried within these two cemeteries in a six acre plot of land.

Our CAP dollars from Region 4 and Local 249 went to sponsoring a new memorial for those people and their families so that they would have a place to honor their loved ones. The total amount given was 40,000 dollars. That’s a lot of money but it is something that our union and leadership all believe in and agree with.

CAP is also donating 5,000 dollars to two different organizations for a total of 10,000 dollars on behalf of the Women’s Committee, to help promote and encourage women in the community, so, it’s not just about politics when we’re talking about the money we donate. I give $55 a month every month and have for quite a while.

It’s not only because I am on the CAP committee but because again, it goes back to knowing and understanding where that money goes.

As far as the political side of things, we as individuals and as an organization, must get out of the habit of pigeonholing ourselves into thinking that we must be on one side or the other or that were only going to support Democrats or Republicans because the goal is not to support either one, we want them to support us.”

If you would like to sign up for monthly donations, raise your donations, or purchase CAP tickets, call, or stop by the union hall or speak with a member of the CAP Committee.