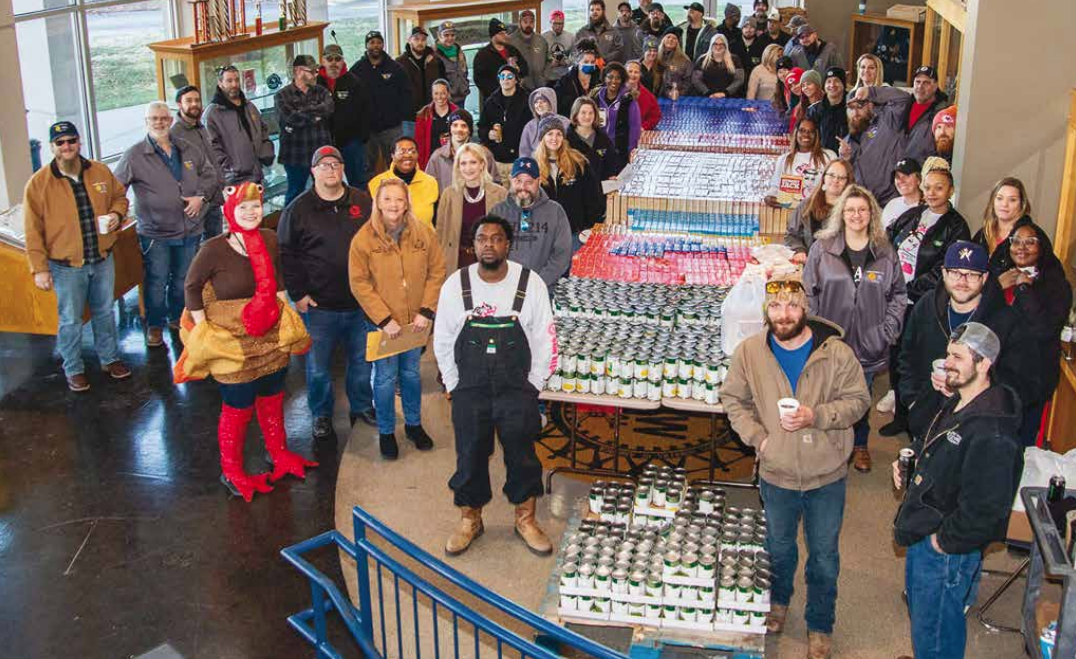 Local 249 is known for its hardworking, dedicated membership and the best-built, best-selling Ford trucks and Transit vans it produces. Members of all the standing committees came together and used their production skills to build an assembly line, not to build vehicles, but to build an atmosphere of solidarity and fellowship while packing Thanksgiving dinner boxes for families in need.

The morning of November 18 was brutally cold, but that did not stop nearly 50 volunteers from showing up at 7:00am at the union hall to empty out truckloads full of turkeys and dry goods for Thanksgiving dinners. The local was able to purchase approximately 1,000 turkeys to be distributed throughout communities in need.

The community had the option to drive by and pick up their meals or have them delivered if they were homebound or lacked transportation. Five delivery teams were set up to ensure those individuals received their meals, delivering over 50 turkeys personally that day. There were no worries of feeling left out thanks to those dedicated members. The meals were offered to community members, Stand-Up KC members, KC tenant members and our very own UAW members in need.

Within the Thanksgiving dinner sacks were a variety of traditional side dish ingredients such as green beans, mashed potatoes, gravy mix, mac & cheese, cornbread, stuffing, a box of cake mix or brownies with frosting, all of which accompanied a massive full turkey. There were also custom UAW Thanksgiving coloring books with USA made Crayola crayons to keep the little ones occupied. Every sack was finished off with a tender note of warmth and gratitude from Local 249.

This grand gesture brought in three news stations, including Fox 4 News, KCTV Channel 5 and KSHB Channel 41. The news stations interviewed both UAW Local 249 President Jason Starr as well as Senator Lauren Arthur and Representative Mark Ellebracht who were also in attendance that day. Despite only KCTV Channel 5 actually airing any of the footage, word still spread about the deeds done that day.

“Those of us in the auto industry have been hit pretty hard with the parts shortages. So this year, the need in our community is bigger than it’s ever been. Which is why we increased our efforts to do an online sign up to give members right in our community the ability to sign up, stop in, and pick up a turkey dinner for their family,” Starr said. “All of the members here today volunteered. We’re so proud and thankful that UAW members have the ability to impact our community like this.”

Senator Lauren Arthur stated that “You guys don’t just build great cars and trucks. You build a great community too.” The day was a great showing of unionism and what it means to truly be a member of a union like Local 249.

This event has been taking place for nearly 40 years, having been started by Al Santellan, a Local 249 retiree who wanted to help the local community. What started as word of mouth and filling laundry baskets with dinners in the early days of Santellan has become truckloads and pallets of frozen turkeys and dry goods to help families in need during the holidays.

The spirit of service was alive as everyone pitched in to pack the meals, music played, and new friendships were forged. Jason Starr stood in the rotunda of the union hall, surrounded by a flurry of activity, loud voices and cheerful smiles and thanked everyone for giving up a hard earned day to be there.

“I am so proud of all of you and the work we have accomplished here today. These events are the humbling kind, the ones that remind you what you have to be thankful for and what it means to help others. Thank you all for coming to help, it truly means a lot to me,” an impassioned Starr shared.

UAW Local 249 members have succeeded in finding not only the true meaning of solidarity but also the humble and pure meaning of Thanksgiving.