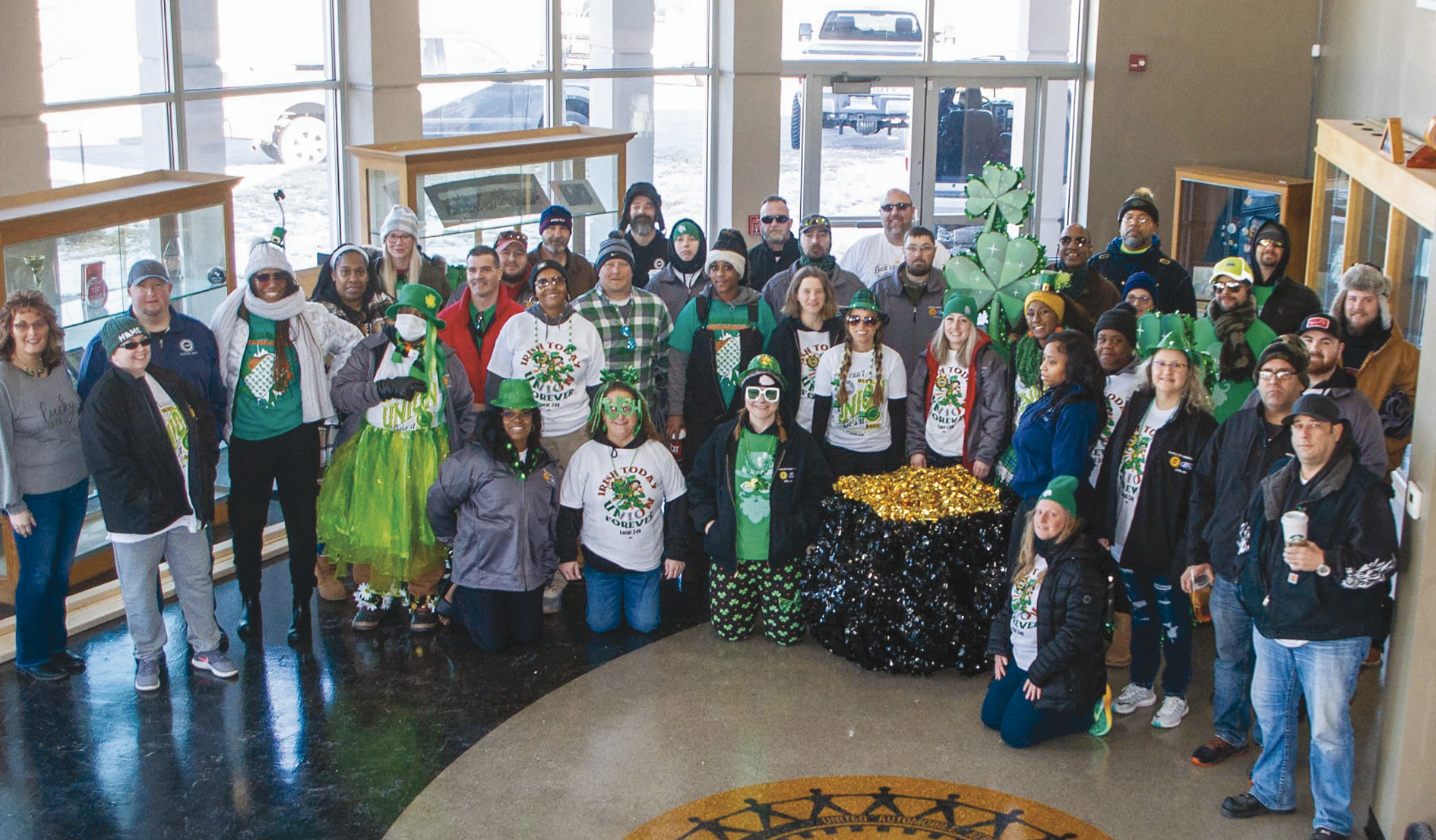 Two, four, nine… two, four, nine ricochets off of the buildings on Armour road as our Local union 249 bellowed out as they marched down the parade route for a yearly event called, “The Snake Parade”.

Every year, the Snake parade consists of the North Kansas City community coming together to celebrate Irish festivities on the week of St. Patrick’s Day. Local non-profit organizations and businesses take part by creating unique floats and custom costumes to entertain the crowd and to get an enormous amount of exposure to their organizations.

It is such a sight to see. To add some extra fun for every participant that marched within the parade, they competed in front of judges for a chance to win cash prizes.

The Snake Saturday parade and festival awards prize money to about 50 to 100 local charities, roughly 2 million dollars to date. The judges were going to have a tough call with the UAW float in the competition. Our float was incredible. Sadie Bass, was the director in navigating the creation of the float, as she contacted the twelve committees to join together to put their innovative skills in motion.

They crafted a 4-foot pot of gold with a dazzling rainbow coming out of it, placed beside about a 7-foot pea green top hat with a big golden belt buckle that wrapped around it. If the giant leprechaun hat didn’t catch your attention, then the green and yellow tinsel and frills with glitter words did, taking the float to a whole new level.

“Our local represented the UAW well today. I will forever remember looking down the parade route and seeing all the kids so excited to get their UAW bags,” said Jason Starr, the president of our local union.

Sam Wilson, a member of the Education Committee, added, “It was great to get the Local 249 name out there more and handing out bags of sweets to the kids as they exchange smiles and giggles. It was amazing!” Children of all ages received goodie bags that had a handful of candy in it, along with coloring pages accompanied with crayons and a sweet note saying how much our local union appreciates the community.

“Interacting with the crowds of people and seeing them receive the genuine message of the UAW helps encourage me to keep spreading unity.” Said Kelsey Pinzino, co-chair of the Education Committee. “It was very empowering to see the crowd listening to us as we chanted, “We are the workers, fighting for Justice and good jobs for all!”

Like the UAW, Snake Saturday started out as a small but powerful development that grew with the astonishing neighborhood involvement and support, making it one of the best parade celebrations in the Midwest.

Snake parade came to life in 1983, with parade founder Mickey Finn and co-founder Bill Grigsby, who at first started this approach for a promotion for Rodeway Inn with only four floats and a grand marshal. Regardless of the weather, the modest yet impressive parade took place in the motel parking lot, making it accessible for the motel residents to watch out their window from inside their warm room..

After a successful march around the parking lot, the North Kansas City mayor suggested Mickey take this exciting event to the streets next year and the years following regardless of the weather condition and always on the Saturday before St. Patrick’s Day.

This year parade attendance was quite a turnout, considering it was a chilly morning, but the sun still came out to shine upon such an entertaining event. Come out and see what this event is all about next year, whether you are an attendee in the crowd with your loved ones or providing solidarity, marching with your union brothers and sisters. We will guarantee you an exciting fun filled day.