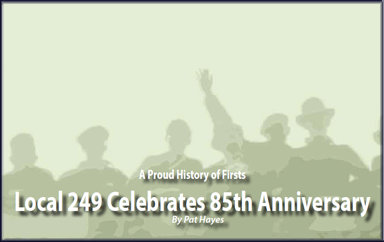 A Proud History of Firsts

Eighty-five years ago, on January 15, 1937, Local 249 became the first Ford local to be chartered by the UAW International. Winning a charter from the International wasn’t easy. Company spies and goons from the Service Department, under orders from Henry Ford, were on the lookout for union activity. The penalty for workers who were caught talking union ranged from being fired on the spot to a savage beating.

At that time, the UAW was fresh off massive strikes at General Motors and Chrysler that brought union contracts to workers in the auto industry for the first time. Even so, the founders of Local 249 and union leaders at the International in Detroit knew that Ford would be much tougher, and more violent, to organize.

Everyone who signed a union card at the Ford Motor Kansas City Assembly Plant in January 1937, then located at 1025 Winchester Ave. along the west bank of the Blue River in the Sheffield District, understood they were making a long-term commitment that came with considerable risk.

Being fired for union activity in the depths of the Great Depression when one quarter of America’s workforce was idle, and more than 15 million Americans were jobless and desperate was no small thing. Still, the appalling working conditions inside the plant seemed to many to be worth the risk.

Workers at the Winchester Ave. plant often worked 18 hours to earn 8 hours pay when breakdowns stopped production and they were forced to clock out and wait on benches outside the plant until the maintenance workers got the line running again. No matter what, the daily production goal set by Ford had to be made.

Bathroom breaks were not allowed. Often, workers wet their coverall when they couldn’t last until lunch or the end of the shift. But, as Gene Minshall, one of the founders of Local 249 recalled, no one much noticed because everyone’s coveralls were soaked with sweat from the harsh nature of the work.

Local 249’s early organizers took elaborate precautions to avoid detection as they signed up new members, collected dues and elected stewards to represent each department in the plant. Even so, company officials soon developed a list of union members and laid plans to fire them all at the end of the shift on April 2, 1937.

As the men lined up to clock out that afternoon, Ford Service Dept. goons and managers began to pull union men out of line and fire them on the spot. They used the pretext that there was a cut in production, but Local 249 leaders understood what was up. They immediately pulled the fuses to the motors powering the assembly lines stopping production. They declared a sit-down strike, welded the gates to the plant shut and organized the strikers into committees, including a fire watch to prevent sabotage.

“Company officials were so flustered over our quick action,” recalled Minshall, “they didn’t know what really happened. They had never seen all their production lines shut down all at one time.”

The sit-down strike – the first in Ford history – was on.

Henry Ford settled the strike and got the plant back into production, but he refused sign a written contract. While the agreement was only verbal in nature it was still a big victory for Local 249. All the union men got their jobs back. Everyone got a raise. An informal grievance procedure was established and a ventilation system installed.

Henry Ford harbored an implacable hatred for unions. He no sooner made the agreement with Local 249 than he began laying plans to break it. During the annual summer shutdown to retool the plant for the next model year, Ford fortified the plant. He instructed local company officials to create a company union – the Blue Card Union – and when workers came back after the shutdown they were forced to renounce membership in the UAW and join the Blue Card Union.

More than half the workforce stayed loyal to the UAW and were locked out – another first for Local 249 – initiating a bitter strike, mass arrests and violent street battles. By December 1937, collusion between Ford, Kansas City officials and police convinced Local 249 leaders that the strike could not be won on the picket line alone. In another first for Local 249 they filed suit with the National Labor Relations Board over Ford’s many violations of the National Labor Relations Act, which guaranteed the right to organize, negotiate contracts and strike. The law also banned company unions like the Blue Card Union.

The strike lasted three years and nine months. The NLRB hearings lasted 18 months. In the end, the board ordered Ford to reinstate 926 Local 249 members with back pay. After a strike at the Rouge Plant in Dearborn, Henry Ford was finally forced to sign his first union contract with the UAW on June 20, 1941.

While Local 249 has a history of firsts of which all members can be proud, our local continues to write a living history inspired by the courage of our founders.

Every day, we are at work to successfully defend the rights of our own members on the job. Our bargaining committee fights to move temporary workers to full time. To fix leap frog issues for in progression members. We take on both the company and the state of Missouri to ensure our members get the unemployment benefits they’re entitled to. We work to enforce safety on the job and the quality of the products we build. We were at the forefront of defending our fellow UAW members on the picket line at General Motors and John Deere.

The first to condemn corruption by officials in the leadership of the UAW International and Region 5, we are at the forefront of building a revitalized UAW that can win better contracts for our members and fight effectively to organize autoworkers everywhere – the key to winning higher wages and expanding benefits.

Our local also plays a leading role in defending worker rights. Local 249 members played a major role in defeating right to work in Missouri. We are building a stronger union movement – one that can take on successfully corporations, their politicians and the media – as leaders in the fight to organize the unorganized, tenants and low-wage workers.

The successful campaigns defend tenant rights and to raise the minimum wage in Kansas City and St. Louis, in which Local 249 members played a leading role, proves this is a winning strategy.

As leaders of the fight for social justice, our members are active in the fight to defend and extend voting rights in Missouri, Kansas and the nation as a whole.

We know it’s a tall order, we know it won’t come without commitment, hard work and an element of risk, but many Local 249 members believe our local isn’t finished writing firsts into our history. We know that together we are strong and as long as we are together, the best is yet to come.