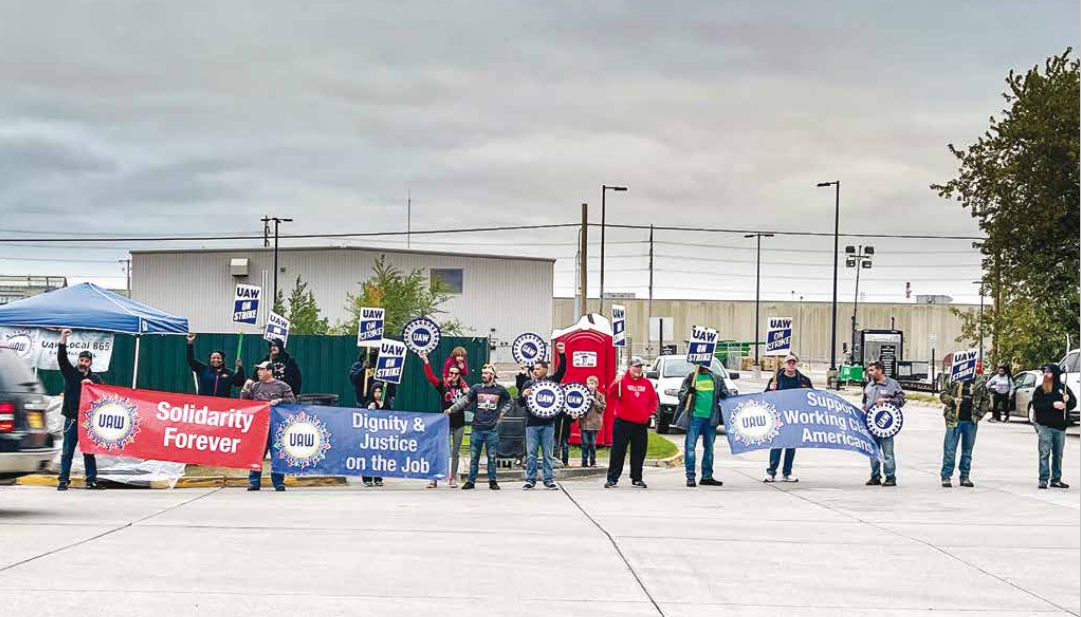 10,000 UAW members walked off the job Oct. 14 at agriculture-implements manufacturer John Deere in the first strike against the company in 35 years.

“On the picket line, one of the strikers, Alex Mitchell Jr., told us Local 865 members from East Moline had driven to Wentzville to walk the picket line with striking GM workers,” says Joshua Curtis, chair of the Motorcycle Committee.

“Having us come to support them in return, he said, was awesome.”

Curtis who comes from a farming family and raises 40 acres of row crops in addition to working at the Ford Motor Kansas City Assembly Plant believes the striking agricultural implements workers have strong support from the farming community.

“I have a friend who owns a Deere harvester,” says Curtis, “and he won’t buy parts right now.”

Despite an injunction limiting the number of pickets at John Deere plant entrances and a ban on burn barrels for warmth, morale among the strikers is high, says Curtis.

After a week on the picket line strikers put their last paycheck in the bank and will have to rely on strike benefits. The weather is turning colder, as well, but those folks, says Curtis, will stand there like a rock.

One of the issues that led Deere workers to reject the tentative contract, says Thomas, was a provision that would have replaced defined benefit pension eligibility for workers hired after Nov. 1. Instead of a traditional pension, newly hired workers would have received a 401(k) under the rejected agreement.

People on the picket line, says Thomas, really believe it’s time to get rid of the two tier pay and benefits that have saddled younger workers with bad jobs that don’t have any future.

“Tough times make strong people,” says Thomas. “These folks are ready to hold the line until they win.”

The strike comes as UAW members overwhelmingly rejected a tentative contract on Oct. 10.

“Deere is reporting record profits, fueled by orders from farmers who are seeing high corn and soybean prices and who had put off equipment purchases in leaner years. Deere projects it will earn $5.7 to $5.9 billion this fiscal year, which ends in November. That’s at least 61% more than in the previous record year, 2013,” according to the Des Moines Register.

Like other manufacturing companies, Deere has struggled to hire workers to meet demand. Reports from around the country indicate that workers are quitting in record numbers, factors that put the strikers in a strong position.

“We stand ready,” says Starr, “to come to the aid of our UAW brothers and sisters in the agricultural implements industry whether that means stocking their food pantries or putting our people on the picket line.”