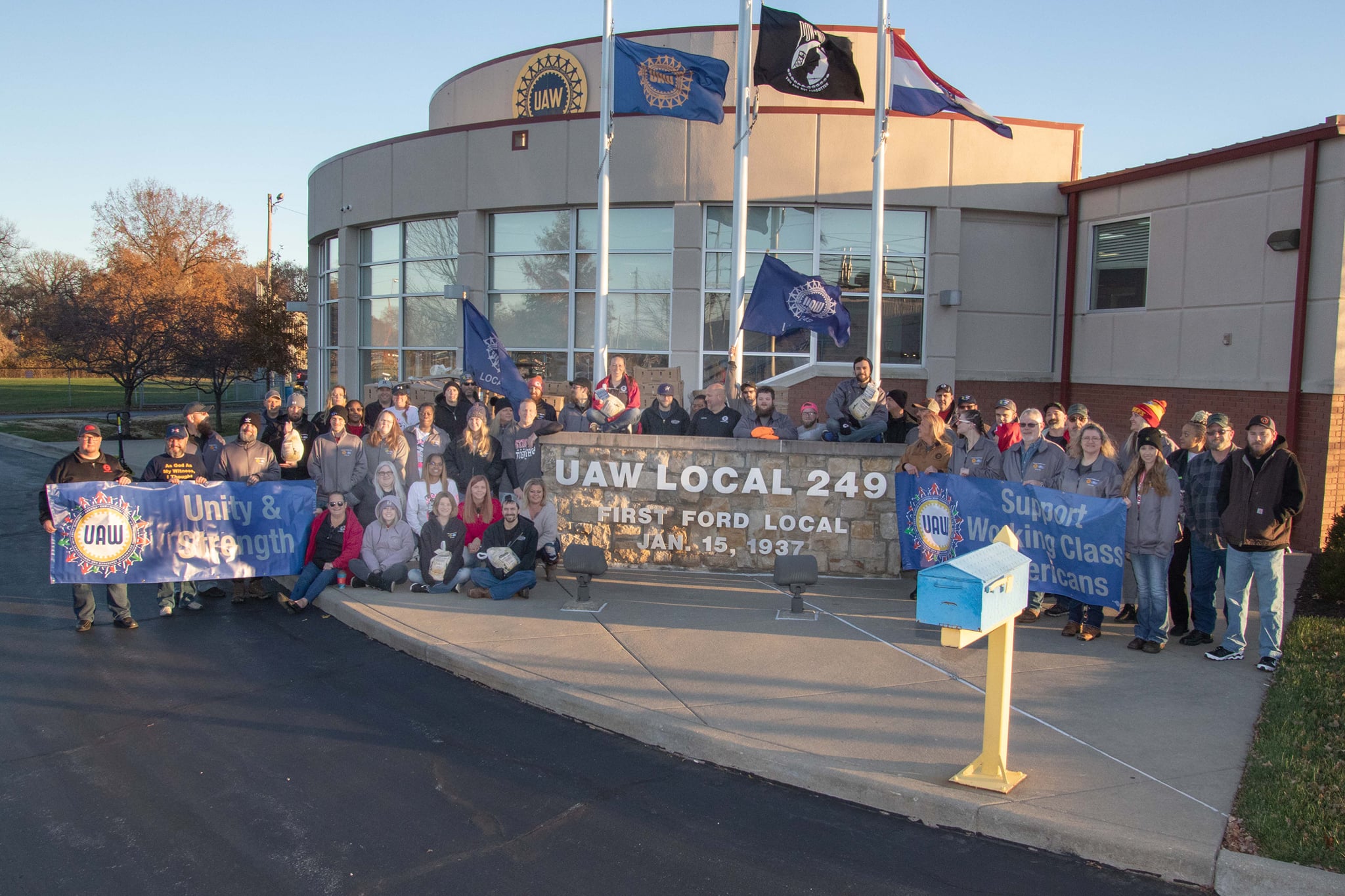 Over the past year, UAW Local 249 and its standing committees have achieved countless hours of service and support to the communities in which we reside. That’s not to say that it has been easy. In the wake of the COVID-19 pandemic and all the fear and restrictions that 2020 brought, 2021 had its own set of challenges to overcome. The stalwart members of Local 249 were not deterred and carved a path all their own as they organized around mask mandates, social distancing, and general fear of gathering as the new year began.

During the frigid winter months early in the year members joined SEIU healthcare workers who were fighting for $15 an hour, showed up to support LMV workers attempting to organize and marched in pickets across the city calling for better wages, treatment and living conditions.

The Women’s Committee held a drive through Easter Hop, complete with the Easter Bunny present for photos and candy delivered to children as they passed through the union hall parking lot. This was one of many improvised activities held, helping members to still maintain contact and connection as the world shifted slowly towards gathering again.

As the weather began to warm up so did the efforts of the standing committees. Members supported the KC Homeless Union at a protest held at city hall, attended Fight for 15 rallies and stood next to the KC Tenants at a rally for fair and equal housing opportunities.

When the members weren’t fighting for social justice, they were exemplifying the ideals we stand for by organizing and donating at a blood drive for a young girl fighting brain cancer, participating in not one but two Habitat for Humanity home builds performed solely by women, honoring fallen veterans with wreaths and holding an event aptly named “Mudfest” given the time of year that would benefit two individuals battling stage-3 kidney cancer and stage-3 colon cancer. These were the projects that humbled members, tugging on heartstrings and reminding all involved why we as a union do what we do.

As things heated up outside, so did the commitment of our standing committees. Members of all committees travelled to Jefferson City to rally outside the Governor’s mansion and demand Medicaid expansion be honored. Local 249 partnered with UAW Region 4 Midwest States CAP to donate a total of $25,000 to the Clay County African American Legacy, Inc. and the Garrison School for their Juneteenth celebration and the construction of a memorial to
honor the more than 700 unmarked graves of African Americans buried in a local cemetery.

The summer also marked the start of several labor disputes that led to picket lines by members of the working class. UAW Local 249 supported Frito-Lay workers on strike in Topeka, KS as well as IAM Local 778 machinists union on strike here in Missouri. Later in the year these efforts would expand to support both Kellogg’s and John Deere on strike for a contract that reflected the hard work and sacrifice of its members over the years.

The Veterans Committee made sure no one was left behind, donating to the Kansas City VA Volunteer Services who often spend their own money to help the veterans in their care. They also donated to the Hope Faith charities to help aid homeless veterans and also teamed up with Harvest Church in providing food that was donated to nonprofits that helped veterans.

The Education Committee stepped in for the back to school season, donating $2,500 to Clay County CASA for school supplies and tutors. Local 249 also made a $10,000 donation to the North Kansas City Education Foundation for school supplies, necessities to kids in need and special grants for teachers to provide enrichment to the students.

The Motorcycle Committee participated in the annual Wings 4 Water event, donating $1500 to provide clean drinking water to people in need as the summer months started to wane.

The Women’s Committee selected two organizations to sponsor and work with in the coming year. Mother’s Refuge, an organization dedicated to helping young and expecting mothers with nowhere to turn and Journey to New Life, an organization helping individuals recently released from incarceration get back
on their feet and become successful in their new life.

Taking a break from working in gardens, organizing supplies and closets, the Women’s Committee hosted Trunk or Treat, where each of the standing committees decorated a trunk and costumed kids came in droves to get their treats.

With the weather turning cooler, the Community Service Committee sponsored a supply drive and raffle basket for Pawportunities animal rescue as they raised money to build dog houses for outdoor dogs in need.

This year for Thanksgiving all the committees pulled together as the local purchased 1,000 turkeys for families in need. This was the first year that full dinners were provided including a turkey and non-perishables to make side dishes. These dinners supported members of our own local in need as well as community members struggling, even some from organizations like Stand Up KC and KC Tenants that we have partnered with throughout the year.

With all of these incredible acts of service, giving and sacrifice done by the members of the UAW Local 249 standing committees, local leadership and our membership the work is never finished. This local has a proud history of a spirit of service done through love and strength and plenty more activities are in the works for the Christmas eason ahead of us.

First Local News will bring you reports of all to come in the next year and give a heartfelt and sincere thank you to all who have made this year the incredible success that it has been. We are yet again proud to call ourselves UAW Local 249. Wishing you happy holidays and a happy new year! See you in 2022.