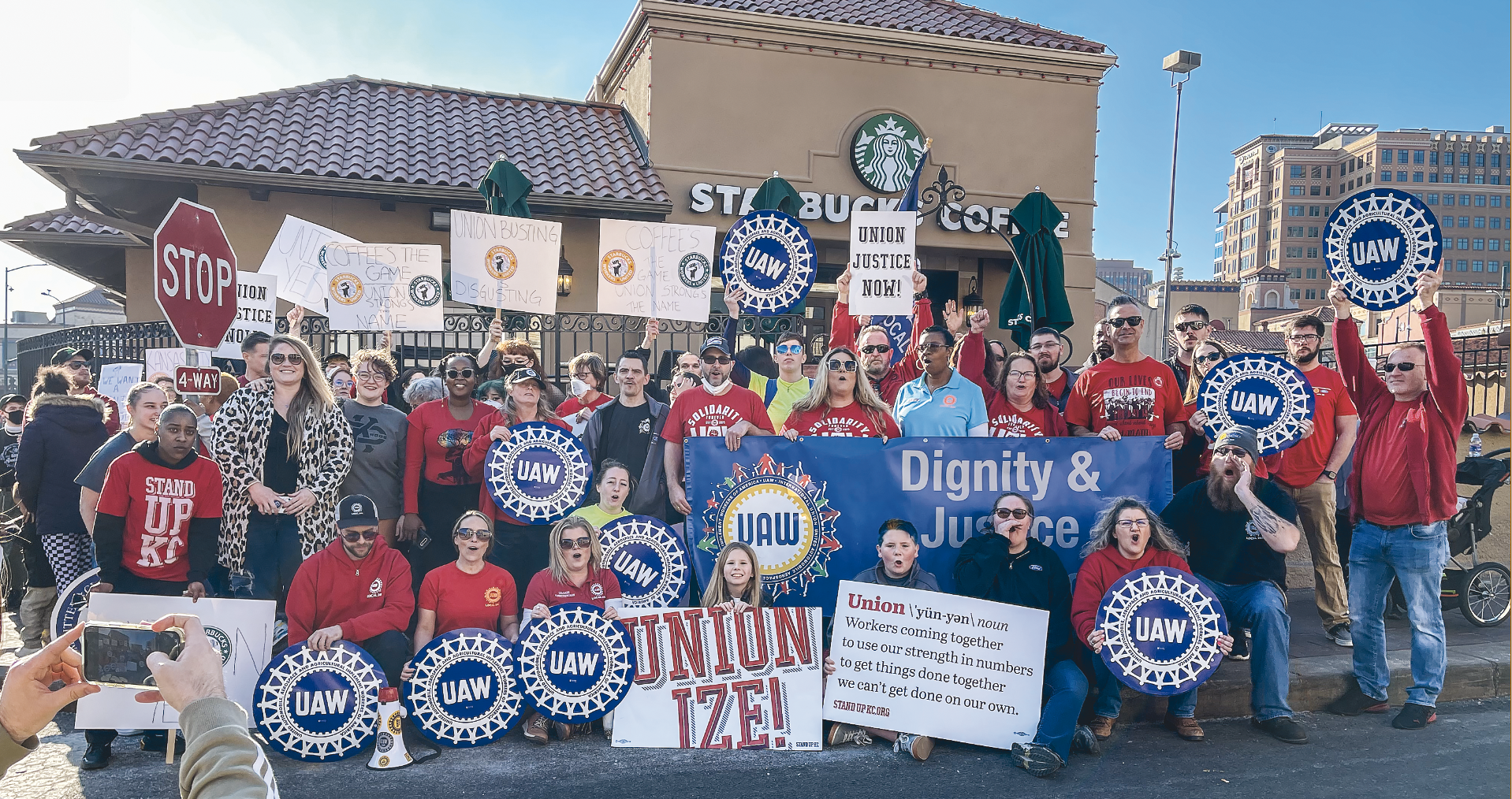 A large protest in solidarity with a Starbucks workers union organizing drive led store managers to temporarily close the popular coffeehouse location and cancel a mandatory anti-union meeting
for employees here March 2. Approximately 200 people, including a large contingent of UAW Local 249, 31 and 710 members, filled the sidewalks and spilled into the street at the corner of Nichols Rd. and Central St. outside the café in Kansas City’s historic Country Club Plaza.

The spirited protest, organized by Stand Up KC and the Missouri Workers Center, was attended by union members, religious leaders and community activists from across the Kansas City Metro. Terrence Wise, a McDonald’s worker, Stand Up KC leader and organizer of the Starbucks protests introduced two Starbucks workers who spoke at the protest.

“We have to deal with chronic understaffing, high turnover, under-training, exposure to COVID-19 and negligent management,” Hope, a barista at the Overland Park Starbucks location, told the crowd.

With the large, boisterous crowd chanting outside the now closed store, Josh, a worker at the Plaza location stepped up to the microphone to tell the crowd of supporters he’d just received a text from management. “Due to unforeseen media coverage, the store meeting will be cancelled today.”

“That’s inspiring,” he told supporters. “If a little under 30 minutes of protesting scares them, imagine what we can do.”

State Rep. Patty Lewis, a Kansas City Democrat and ally of Local 249, attended the protest and told the crowd the Starbucks organizing drive in Kansas City could inspire other workers in the service industry to organize. “We are a proud union city,” said Lewis. “Everybody deserves a seat at the table, the right to organize, negotiate wages, working conditions.”

Starbucks workers in Kansas City are part of a growing, nationwide organizing drive at the Starbucks chain. After five stores in Buffalo, New York voted to unionize in recent months, the
ranks of the organizing drive swelled to include workers at 105 locations in 26 states asking to be represented by Workers United, an affiliate of the Service Employees International Union
(SEIU), according to Richard Minter, the union’s vice president.

Coffee is big business. At last count, the Seattle-based Starbucks chain included 8,947 company-operated and 6,497 licensed stores in the United States. In 2020, Starbucks employed 349,000 workers in its U.S. locations. It’s profitable, too. In 2021 it reported more than $4 billion in profits. Starbucks CEO Kevin Johnson saw his overall compensation grow 39.3% from $14.67 million to $20.43 million last year, according to the U.S. Securities and Exchange Commission. His estimated net worth is over $90 million.

While Johnson and other Starbucks executives and shareholders are rolling in it, grinding poverty is the norm for the Starbucks baristas who generate those profits. The average pay for a Starbucks barista in Overland Park, according to Zip Recruiter, is just $20,899 a year. That’s $402 a week or $1,742 a month. The median rent in the prosperous Kansas City suburb is $1,164 a month.

“It is not easy to stand up to your employer and demand a collective bargaining seat at the table for your workplace conditions, pay and benefits. That is why I support and encourage the brave baristas at Starbucks locations who are standing up for their voice in their working conditions,” said UAW International President Ray Curry, in a statement.

“There are over 1 million UAW members and retirees and their families who benefited greatly from having the right to bargain at their workplace and we want the same rights for hard working Americans in all sectors of our economy,” he said. “The organizing efforts of Starbucks baristas inspire and encourage all of us to stand up in solidarity and support each other in having a voice and fairness in our working life.

UAW members are proud to support Starbucks baristas in their effort.”