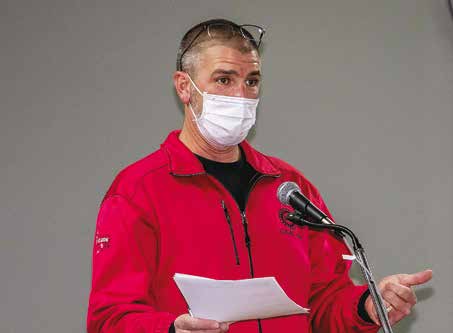 On Thursday January 27, it was officially announced that the Kansas City Assembly Plant would start the immediate conversion of an additional 150 TFT members to Full Time In-Progression status. All these converted members were done ahead of the National Contractual Language. Some of these members hired into KCAP as a temporary worker in the middle of June of 2021. This means they only held temporary status for about seven months. Over the past 13 months Local 249 has converted 784 TFT members to Full Time In-Progression status, and most of these conversions have been done ahead of their contractual obligation date.

I would like to thank UAW Vice President Chuck Browning and his staff for their full support while the local has worked hard to protect our TFT members. These early conversions have led to those members receiving instant pay raises, improved health care, and additional protection in the disciplinary process thanks to their early conversions.

The success of these conversions has truly had an immediate impact on these members and their families. The leadership team of Local 249 would like to congratulate these members for their hard work and dedication.

The plant production schedules remain uncertain due to the supply chain issues. These issues have been ongoing over the last several months and it appears they will remain hard to predict over the next several months. The semiconductor chip shortage has had a massive impact not, just in our plant, but the entire automotive industry.

The latest report from the U.S. Department of Commerce suggests that microchips will continue to affect the automotive industry for at least 6 more months. At KCAP we remain fortunate that both the Transit Van and F-150’s remain in high demand, and our plant remains a priority for Ford’s production plans. Obviously, these supply issues will have impact on our production schedules, and we will get information out as fast as possible if schedule changes do occur.

During the holiday season our region, community, and plant were hit very hard by a greatly increased amount of coronavirus cases. This had a direct impact on our membership. Several members were placed out of the plant while recovering from the virus, and unfortunately our local lost some members due to the virus. As a local we are heartbroken by this news. We ask that all our members keep those affected in their thoughts and prayers.

During the week of January 10, our Local 249 Chaplaincy Committee was placed inside the plant to offer support to our members. Coronavirus has impacted all of us differently and continues to be part of our members and community. I want to thank the Chaplaincy Committee for their professionalism in working with our members and providing guidance. Our ESSP Representative is still offering service for members wishing additional avenues for counseling. The ESSP Office can be reached at (816) 459-1226.

A couple of positive notes for our members, in 2021 the F-150 achieved the “Best Selling Truck” for the 45th straight year and the “Best Selling vehicle in America” for the 40th year in a row. Transit has been the best-selling van since first introduced in 2015. The E-Transit will hit the market this year. Ford expects industry sales of full size all electric truck and vans in the commercial and government segments to be over 300,000 by 2030. Ford was the best-selling auto maker in the fourth quarter of 2021, and Ford began 2022 with 247,000 vehicles in stock, and the best position in the auto industry. As you can see things remain very bright for our future at KCAP. Let’s all make sure we keep our plant heading in the right direction.