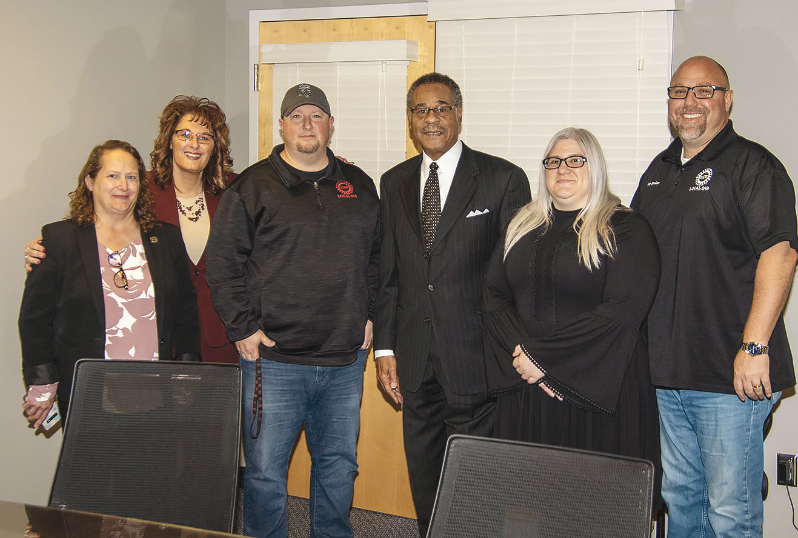 Congressman Emanuel Cleaver came to Local 249 March 24 for a very productive meeting with Local 249’s leadership about the redistricting battle raging in Jefferson City. If you haven’t followed developments closely, you may be surprised to learn that the fight isn’t so much between Democrats and Republicans, as it is between Republicans and their fellow Republicans. Even though the GOP has enjoyed two decades of supermajority rule in the state capital, they can’t get anything done because they can’t agree among themselves about what to do.

The latest census allows Missouri to elect eight representatives to the U.S. House in Washington DC. Based on the total vote in recent elections, fairness would dictate that congressional district boundaries be drawn that result in sending three Democrats and five Republicans to the nation’s capital to represent the state. Even though that would give them 65% of the representatives in the state delegation, that – apparently – is not enough.

For months, Republicans have been locked in a destructive internal battle between those who are satisfied with cutting Democratic representation to two, and those who demand that it be cut to just one. While they fight among themselves virtually every other piece of business has ground to a halt in Jeff City.

Filing deadlines for candidates in the next election have come and gone without a settlement having been reached between the two warring factions. Other pressing business has been ignored. The business of drawing the district boundaries may end up in the courts.

While Republicans may be holding knives to each other’s throats over redistricting, they are as one when it comes to what they claim are the most pressing issues facing the state. They all agree that transgender athletes – there have only been two transgender girls who’ve wanted to play high school sports in Missouri over the past 10 years, according to The Kansas City Star – and Critical Race Theory, which isn’t taught in any K-12 school in the state, are at the top of the agenda of the most pressing issues facing the people of Missouri.

Why? Because Republicans have learned that style over substance wins them elections even as the laws they pass lower the quality of life and the state sinks to the bottom rank among the 50 states. Their showmanship and grandstanding provide a diversion that draws voters’ attention away from real problems that might be solved by our elected leaders. For Republicans, distraction is the attraction.

What real problems might be solved if our attention wasn’t constantly being drawn to the latest bogus outrage ginned up by the Republican puppet masters in Jeff City? There are many.

Missouri ranks 50th in the nation for educators’ average starting salary at just $32,970, much less than the national average. It’s not just teachers, either. Missouri is also dead last in state employee pay. Outside of state government, the state ranks in the bottom half for median wages for all workers.

Missouri ranks 49th in the nation in K-12 school funding from the state last year, according to a report from Auditor Nicole Galloway. This is reflected in the fact that 25% of the state’s schools are now on a 4-day schedule due to a lack of funding. Lathrop, one of the school districts that many of our members’ children attend has been on a shortened schedule since 2010.

Missouri ranks 41st in health care access, quality and public health, and more than 80% of Missouri children have elevated levels of lead in their blood far exceeding the national average.

Missouri failed to adequately report and protect missing foster children according to the U.S. Department of Health.

The state has 2,262 miles of levees that protect $27.7 billion of property, but funding is insufficient to comprehensively mitigate flood risks according to the American Society of Civil Engineers. The state has identified 4,800 substandard bridges that need repairs, totaling an estimated $4.2 billion. In addition, 25% of the state’s roads are in poor condition. Each Missouri motorist pays, on average, $743 per year in additional costs due to driving on roads in need of repair.

While this is by no means a comprehensive list of the pressing problems that need to be addressed in our state, you would have listened in vain to hear anyone in the Republican supermajority in Jeff City take to the floor to suggest that anything be done about any of them.

While grandstanding on nonexistent issues is the order of the day in Jeff City, we had a productive and respectful meeting with Congressman Cleaver about the real issues facing our members and our plant. We talked about the redistricting mess, the new E-Transit and the future of our plant.

He assured us that, “while the boundaries for congressional districts come and go, my support for America’s union workers remains steady. No matter how the maps turn out, I will continue advocating on behalf of the labor community with the same fervor that has defined my career since my first days on City Council.”

When will the meaningless showboating end in Jefferson City and the real issues affecting our lives be addressed in a meaningful way? It won’t happen until we put a stop to it. That means that members who, in the past, stayed home on election day need to step up to put an end to the bad joke Jeff City is playing on them.