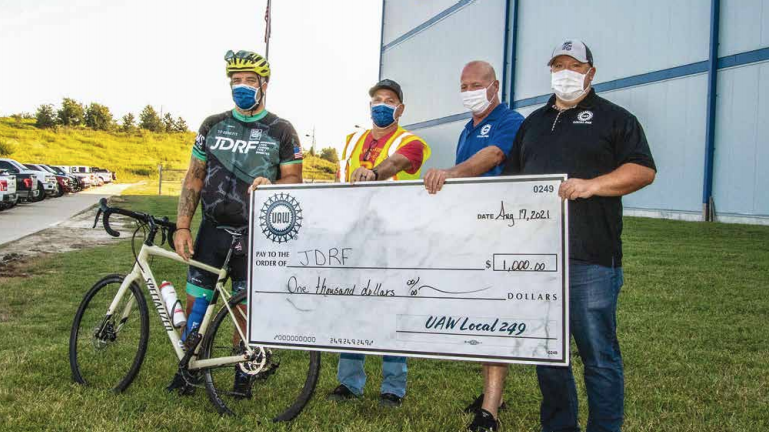 Darwin Ost: Riding for a reason

Darwin Ost , UAW 897 Health and Safety Representative at the Buffalo Stamping plant, set off on his own incredible journey cycling across the U.S to raise funds for diabetes on behalf of the Juvenile Diabetes Research Foundation. JDRF is the leading global organization funding research for Type1 diabetes.

Ost, 46, Started in Buffalo and has since ridden his bicycle more than 2,400 miles to visit other Ford plants in Cleveland, Louisville, Chicago, Kansas City, Dearborn headquarters and his final stop being the Oakville Assembly plant in Canada before heading back to Buffalo.

Ost usually takes part in raising funds through their annual JDRF golf tournament but because of Covid they haven’t been able to have that event in two years. “He’s always wanted to do something special,” said Mary Ost, Darwin’s wife.

“He’s always liked riding, and Ford has always worked with JDRF to raise funds and awareness through the tournaments and so when those were cancelled he figured out a way to raise those funds himself.”

His goal is to try and meet the volume of donations that are usually acquired through the tournaments. Ost has managed to raise over $13,000 in donations so far. Local 249 was able to contribute $1,000 towards his goal of $50,000.

“His motto is that it’s impossible to not be happy on a bike,” said his daughter. “I’m tired but it’s been really fun!”

Darwin’s wife and 15 year old daughter travel behind Ost as he rides. He has stops planned out every 20 or so miles. He travels over 80 miles a day on his bike. He made a book for his wife with detailed directions, planned stops for things like food, gas and campgrounds to park their camper overnight. When asked if he trained for this, Ost stated “ I jumped in with both feet, 6 years ago I said I can do this and I started riding my bike to work about 11 to 12 miles a day on an old heavy bike.”

He now travels on a 22 speed bike that has all the functions for long distance travel. His bike is equipped with shock resistant handlebars to help with rugged terrains and gravel, 28 inch tires that are thin for less rolling resistance, a high tech GPS device that not only provides directions but also informs him of his heart rate, monitors elevations and climb ratios and many other neat functions to assist with his travels.

He discussed animal encounters while traveling through Kentucky he said he saw deer, a peacock, bison, eagles and was even chased by a couple of dogs that he felt were just excited to have something to run with. He traveled through Missouri mostly on the interstate and got to ride along the Missouri river.

“Missouri is nice” he said, “I’m in love with the state, it’s beautiful”. When asked why he rides, he had this to say: “Our world grows smaller every single day. We can get from one side of the earth to another in hours, not weeks or days. We can land on the moon, plan trips to Mars, and see far beyond that. We have technology that lets my children learn from the safety of our home. Technology that sequences a genome, but we can’t fix diabetes…YET!

My best friend’s Father had to have part of his foot amputated because of diabetes. Type One diabetes affects more than 1.7 million Americans. Well how about we turn Type One into Type None. I ride for JDRF to help make that happen and it’s why I want to go EPICALLY BIG! The world is small, and we are in this fight together.

All of us play a role. I can help my fellow man, I can work to improve society, I can fight to bring about change, or I can sit on the sidelines and complain about it. I am choosing to get into the fight, It’s the right thing to do.

I ride so that others may have a better life with better treatments. I ride so that I can help JDRF put Type One behind us and take on the challenges of tomorrow. I ride for those who can’t.“ Thank you Mr. Ost for being an honorary advocate for change. If anyone is interested in making a donation please follow this link: http://ow.ly/ hoTR50FSXzK