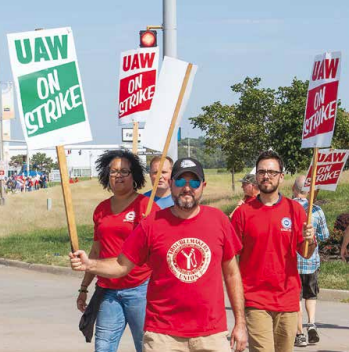 On April 6, 2022 The Missouri General Assembly “perfected” House Bill 1860.  The perfection process of the bill is when legislators have an opportunity to debate the bill “on the floor” (that is time when a bill is presented to all 163 members to consider and debate the bill).  From there, the bill will be voted on one last time, then sent to the Senate for consideration.  I take these means to discuss this particular bill with you because of what it represents to us, to our communities, and to the folks that are elected to represent us in the state legislature.  Currently a worker in the state of Missouri who has worked for 12 consecutive months can be eligible for unemployment benefits for up to 20 weeks if they find themselves unemployed or laid-off through no fault of their own.  House bill 1860 seeks to reduce our unemployment benefits from 20 weeks to 8 weeks.

It is no secret that many of us are dissatisfied with our elected officials.  Legislators—the ones who are sent to set the policy of the state of Missouri by your votes in November—routinely campaign for office on issues that generate a great deal of public attention but have very little impact on our daily lives, or any significance in the actual policy of the state of Missouri.

The campaign rhetoric offered up by many candidates rarely discloses that the individuals who are asking for your votes will, once elected, advocate to undermine your unemployment benefits or weaken the benefits that we worked hard to extract from businesses who benefit from our labor.  Instead of telling us that their agenda includes plans to reduce our unemployment benefits, or to make it more difficult to obtain health insurance, or to reduce the likelihood that you will be able to both pay off your mortgage and put your kids through college, these policy makers distract us with nonsense issues, and not coincidentally grab headlines and sell advertising space for the media outlets that push them out to us.

House Bill 1860 is the perfect example of these policy makers distracting us with nonsense issues like CRT in schools (which is not happening in any Missouri Schools), or “transgendered high school athletes” (which is not something that’s happening in any district in Missouri that I am aware of) while actively working against our economic interest.  The purpose of having a 20 week unemployment benefit is to account for the fact that many of Missouri’s workers are only employed seasonally—my father was one of those individuals.

He poured concrete.  Concrete cannot be poured from mid-November through Mid-March, unless the weather is unseasonably warm.  Mid-November to Mid-March is five months.  Five months is 20 weeks.  Boilermakers, welders, carpenters, electricians, painters & allied trades all require extended unemployment terms to protect them against the inability to maintain consistent employment through those unseasonable periods.  This is a seasonal issue for many Missouri workers, but for us in Clay County, it was a very real and very immediate issue when the pandemic hit and right on its heels our KCAP was shut down because of parts shortages.  We needed those unemployment benefits, and many of us needed them badly.

Folks might respond to this by saying that someone who cannot work through the winters should find something else to do when they cannot work their regular job.  They should be saving up during the times that they are working to plan for the time when they aren’t.  Hogwash.  I am a capitalist, and I know you probably are too—a capitalist that believes in trade unions, and one who also knows that for most of us the only capital we can significantly contribute to the free market is our labor, our time, and our skill.

No one could have predicted the pandemic, and no one would have imagined that before we were even all the way out of the pandemic we would be smacked with parts shortages.  If billionaire corporations and millionaire shareholders can “protect” their capital “contribution” by rigging the tax code, sheltering their assets off-shore, getting PPP loans, and playing games with the stock markets, then by God we have the right to protect our time, our labor, and our skill that we contribute to those same markets.  House Bill 1860 says “No, you don’t.  You need to get your ass back to work.”

The Associated Industries of Missouri (A.I.M.) is a lobbying group in Jefferson City that is made up of businesses like Ameren, Spire, Evergy, (the kind of businesses that take money from every one of us every month and provide mediocre service at best) The Doe Run Company (that quaint little boutique mining company that poisoned an entire town—yep they’re still in business in spite of having to pay about $70 million in fines to the federal government for poisoning all those folks with lead) and Boeing (the company that built those 737’s that had an inconvenient tendency to drop right out of the sky).  A.I.M. came and testified in support of taking away your unemployment benefits and said “A.I.M. supports reducing the length of unemployment benefits when the unemployment rate is low.”

The Missouri Retailers Association says “We support getting people back to work.”  These are the exact same lobbyists that tried to convince us that Right to Work would have been a good idea.  By the way, the companies that pay these lobbyists to tell us to get our asses back to work and tell us that Right to Work is good for us, those are the same companies that spend hundreds of millions of dollars buying ad space on Fox News, MSNBC, CNN, Facebook, Twitter, and pretty much every other corporate media outlet.

That’s probably why we hear more about which bathrooms high school kids are using every night on the news instead of actual policy issues like House Bill 1860.  Both the left and the right fall for this distracting nonsense, and I hope you hold them both accountable when they do.

I wanted to use House Bill 1860 to demonstrate something that gets overlooked, or even dismissed a lot of times.  We have things we like and don’t like about certain politicians.

We have disagreements on things like what kids should learn in schools.  We also have school boards and superintendents to address those concerns, and we should pay more attention to those offices for those issues.  We cannot let ourselves get distracted by the noise that gets blasted in our faces every hour of every day trying to make us forget that the policy that matters—the public policy that each and every one of us shares—is the policy that effects our wages and our working conditions.

We have a Union that will help us get the information that is important to our jobs and the public policies that improve our jobs and our way of life. But when we get distracted by issues that do not unite us, we risk losing everything we’ve gained… that is, everything we haven’t already lost.