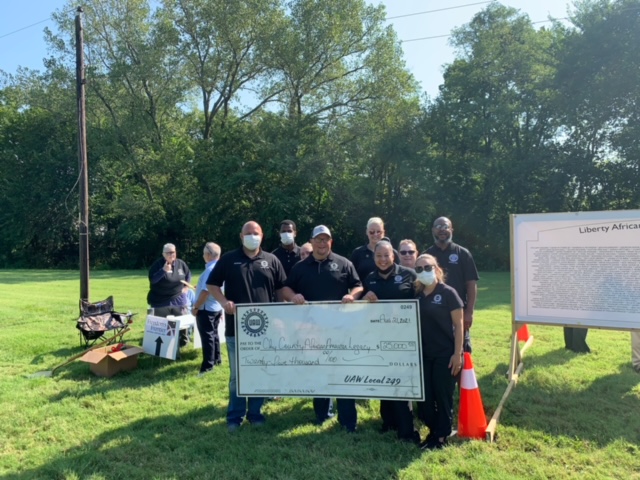 Juneteenth’s true meaning is a celebration of freedom and unity amongst the diverse cultures of African Americans. It is not meant to be celebrated only in June, but in essence, every day. This year UAW Local 249 and UAW Region 4 Midwest States CAP have come together to help memorialize and celebrate the essence of that holiday by donating $25,000 to the Clay County African American Legacy.

Juneteenth is day of celebration that originated in Galveston, Texas, that is now celebrated yearly on June 19th.

On January 1, 1863 President Abraham Lincoln signed the Emancipation Proclamation freeing enslaved African Americans. Since the war was still at large between the states, it wasn’t until the leader of the confederate army surrendered in 1865. Andrew Johnson, the president at the time, then positioned Major General Gordon Granger of the union army in command of Texas who then declared the freedom of all enslaved African Americans.

Liberty, Missouri takes this holiday to heart since they were the first to launch the Juneteenth celebration held in a suburban city, in the greater Kansas City metroplex.

Samuel C. Houston’s was one of the first African American families who settled in Liberty in which he took up his studies from an all-black school named the Garrison School. With hard work and dedication in his studies, he later became a powerful voice and leader for African Americans. He went from being employed as director of custodial services for the Liberty Public schools, owning his own custodial business, to becoming the chair of the First Baptist church Deacon Board and had then served as the deacon for 50 years.

On June 17th, 1989, Samuel was the first African American city councilman in Missouri who organized volunteers in the community to host the first Juneteenth celebration in Clay County.

Over many years, you could participate in Liberty’s Juneteenth celebration in the Kansas City Shoal Creek golf clubhouse and at Saint Luke’s African Methodist Episcopal Church. It was most fitting to also host the celebration at the Historic Garrison District, at Ruth Moore Park, or the Garrison School Cultural Center (Houston’s former school).

As part of the 2021 Bicentennial Celebration for Missouri’s statehood and the 21st Juneteenth celebration for the city of Liberty, the Clay County African American Legacy Inc., partnered with the city of Liberty to dedicate two historical markers in honor of Ruth Moore, who was the active chairman of the 1954 Liberty Parks & Recreation Board, and Samuel Houston. The Legacy memorial will be a three-phase project located in Ruth Moore Park and a Sankofa Bird sculpture at Garrison School Cultural Center.

UAW Local 249’s President Jason Starr partnered with Region 4 Midwest States CAP to help bring these memorials to life with a total donation of $25,000 to be used for the projects.

The memorial in Liberty, Missouri, will include fifteen bollards to mark the perimeter of the six-acre burial ground where the remains of more than seven hundred African Americans were buried in segregated sections of Fairview and New Hope cemeteries. Day laborers, war veterans, children, people who were enslaved and many others were all buried within those acres. Most in unmarked graves.

The memorial will include a walkway through time, to reflect on the strong and powerful spirits of the African Americans that once lived there. Along the pathway you will be embraced with stories, poems, and spiritual or creative works that expressed the strong will of the black essences. At the end of the path, you will be greeted with more than seven hundred names engraved into granite to pay respect to the existence of the honorable African Americans who helped to build Liberty to what it is today.

“The purpose of the African American Legacy Memorial in Fairview Cemetery is to honor and respect the Black lives who are buried in the hallowed ground of this sacred space, and to celebrate the Bicentennial of Missouri’s statehood. We are rewriting the history books with this memorial that will help bring about reconciliation among our residents.

Whether among those who were enslaved or free, the African Americans buried in unmarked graves of Fairview and New Hope are a testimony to a community of resilient people with character and principles who make significant contributions to Liberty and Clay County,” said Dr. Cecelia Robinson.

Dr. Cecelia Robinson who is the Garrison School’s Historian and Gallery Curator, has reached out to our Local 249 Civil Rights Committee to seek funding to help in the next remarkable Juneteenth celebration. This program will not only help with the legacy memorial but it will also include two bronze historical markers, a community concert, speaker, funding to cover the updating and publishing of 1,000 public relations/tourism brochures that feature the African American Historical sites of Liberty and the Brochure for Garrison School.