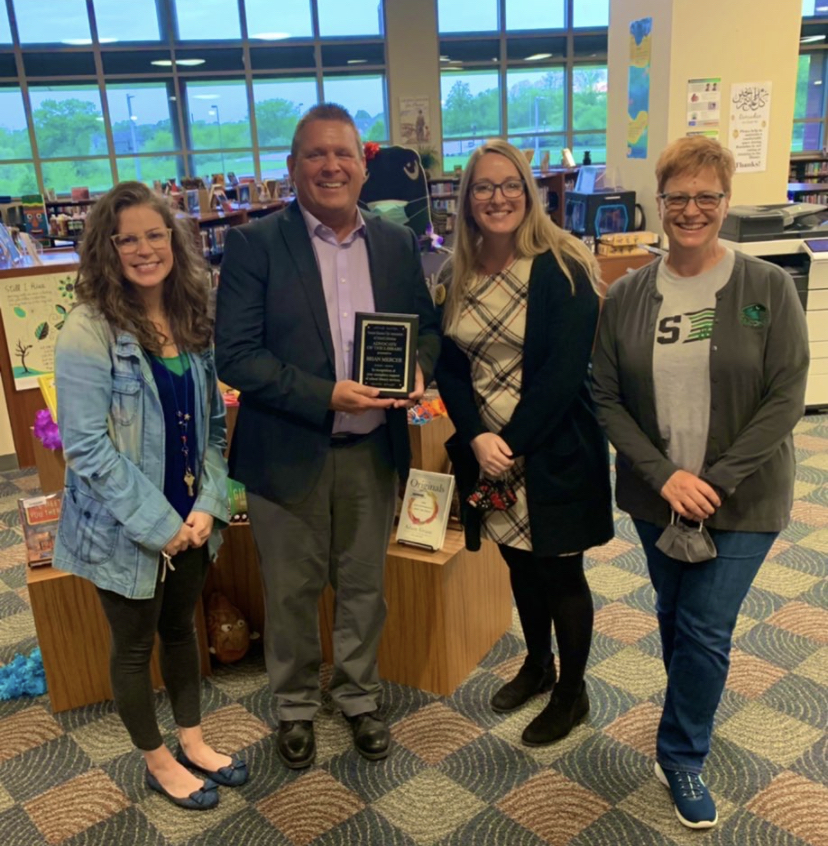 UAW Local 249’s Brian Mercer personifies what it means to be a dedicated positive force for change in the world around us. Despite the rigorous work schedule and early mornings of working at the Kansas City Assembly Plant, Mercer has been involved with public schools around the Northland and Greater Kansas City. From PTAs to boosters, from committees involved in the building of schools and their stadiums to being a member of the North Kansas City Education Foundation and many committees in-between, Mercer is a busy man.

Mercer started working at Ford 27 and a half years ago. “That half a year is important! It all counts,” he said. He is now a tag relief utility in Transit body shop. Thanks to the UAW and working in a seniority shop he has been able to bid on jobs that allow him to pursue his passions outside of the factory walls. Those passions have led to being inducted into the Liberty High School Hall of Fame.

When asked Mercer stated, “I just woke up one day and decided I needed to get involved. Working for Ford and being a member of the UAW has provided me with a good living, a great living, so as my kids got older, I started thinking maybe I should start giving back and set an example for my kids.” At first, he wasn’t sure what the best way was to get involved, eventually deciding to try, and run for the school board. “I put my name on the ballot and I ran. I did like 25 signs myself, I’m not a rich man, I put the signs out, knocked doors and did community events and ended up with over 3000 votes.” Mercer was shocked by the number of votes that he had received and stated that it gave him enough confidence to try and run again next year.

He was later contacted by a woman who said that she and her colleagues were so impressed by the work he had put in that they wanted him to consider taking over her position. She was stepping down during her term as the North Kansas City School District PTA Council President. Her job was to oversee all the PTAs, booster clubs and promote community events. To Mercer this was a dream come true. It sounded like exactly the type of position he would be interested in.

“The school board position sounded like a lot of meetings and board rooms and I’m more of a boots on the ground, with the people, kind of guy. I like the parties and fundraisers where I get to walk around and thank everyone for coming and promoting all the work we do,” Mercer shared.

All the PTAs voted him in and then later requested he stay for another three-year term. He was overwhelmed by the support and after getting in touch with the Missouri PTA he was able to stay on for another three years. Mercer found out through his position just how important the roles of the PTA and boosters were when it came to generating money to go towards schools, teachers, and students. He also expressed the level of detail in coordinating is greater in high school because then you also have sports teams like football, baseball and soccer that take on concession stand responsibilities for fundraising.

Something as simple as arranging a tailgate event before a football game requires buying large tents in case it rains, massive BBQs to handle the volume of people, as well as someone to man them! “The average PTA only has 5 to 7 people, and they aren’t going to be able to cover that alone, so they will have to reach out for help, and it’s all volunteer.” Mercer shared his experience about learning how truly selfless some people were once getting involved and how incredible it was to see.

One thing Mercer noticed in his time working with the school districts is that there were not as many men involved in the PTAs and boosters as he had hoped. “It was important to me to show other men that they could be involved too. I wanted dads to know there is room for them too. These days it isn’t dad going to work and mom staying home all the time, both parents are usually working, and everyone should be able to volunteer for these types of programs. Change can be tough so hopefully I showed some dads out there that they can jump in too.”

Mercer’s daughter, a senior at Winnetonka, will be the last of his children to graduate high school. When asked what he planned to do after his children had all left home and he found himself an empty nester, Mercer shared he hadn’t made any definitive plans yet. “I think that even when I decide to step down from being President I will still be involved on social media and supporting the schools. I really enjoy being an honorary ambassador for the school district. There is so much negativity on social media these days, I try to double down on the positivity to help, and some of it probably comes across cheesy.”

Despite Mercer’s plans to stay involved on social media he explained the reasoning behind his lack of plans. His wife Tiffany has been and still is a huge supporter of his work and his passion. Some nights after getting up for work at four in the morning I come home after my shift, shower, get a quick bite to eat and get into my district apparel and I’m out the door again to attend a function or two for the schools. “She always supports me and recently reminded me that I’m only two and a half years away from retirement, she has seven to ten in the district, and she wants to go somewhere that there’s water and it’s warm.”

“She has always been there to support me and so there will come a time when I need to give that back to her, to show her that it’s time for me to focus my energy back on her now. It is time to support her back and her dreams and passions, so I don’t want any set plans for myself because I want to make sure she is happy,” Mercer stated.

When reflecting on his time in the UAW and the lifestyle that he has achieved because of being a member of this union Mercer is grateful for the opportunity to retire in the future and spend time with any future grandchildren that come along. “Something you learn as you get older is that you have to be ready to adapt to change at a moment’s notice. You never know what life is going to throw at you,” Mercer said.

Between now and that oh so enticing retirement date, Mercer plans to continue to double down on the positivity and be a friendly face to those who cross his path in the body shop and beyond. “Everyone needs to be seen and to feel like they matter, so that’s what I try to do.”

Mercer also added that he would love to see more people get involved not only in our schools and communities, but inside the plant as well. To donate your time no matter if it is one hour or twelve. It’s still volunteering and helps build the feeling of community. The last couple years so much has changed, and now without having dinners and potlucks and having to distance ourselves from one another, there is a disconnect between so many people.

Take a small step and investigate some of the work done by the standing committees in the union. See if there is one that matches your interests or find an organization outside of here if that is your thing. If we all were a little more unselfish and gave just a little of ourselves, the world would be a better place.