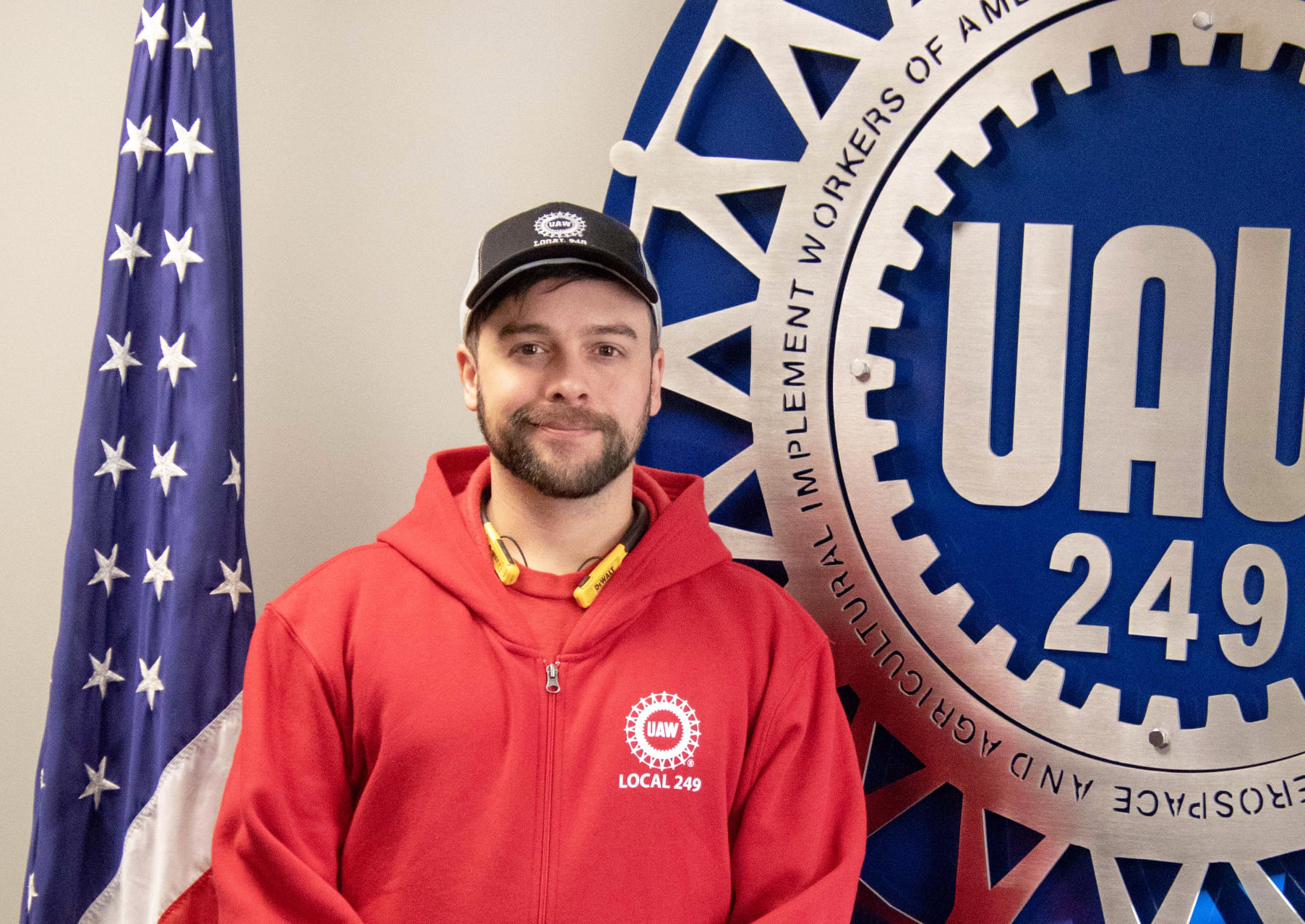 In this month’s member profile, we would like to highlight Austin McFarland. Austin has been a member of local 249 since 2015. He is a proud union activist and currently serves on the Member to Member Committee. Austin has been involved for about a year with plans to continue his loyalty to represent and serve the membership.

Austin was at work one day listening to the Solidarity Academy podcast, which if you haven’t heard, is a podcast hosted by Local 249’s Education Committee.

It had been a long frustrating day of watching temps and utilities get taken advantage of by management and he realized that people were afraid to stand up for themselves when it came to management. Frustration fueled by the unfair treatment of his coworkers, and the empowerment he received by listening to the podcast led Austin to decide it was time to do his part and get involved. Eager to begin, he sent persistent emails to local President Jason Starr and landed himself a place on the Member to Member Committee.

Since joining, Austin has remained active with not only his own committee but others as well. Austin never misses a chance to participate in anything that strengthens our ability to be a successful organization.

He believes in our brotherhood and is willing to put forth his efforts wherever they are needed whether in the plant or in our community. Austin has attended
education classes, strike lines, engaged in support for Local 249’s humanitarian responses and has been a staunch activist on behalf of our local community issues pertaining but not limited to raising the minimum wage, the fight against the so-called “right to work”, the KC Tenants activist group and so much more.

“I was working one day and started listening to the podcast,” said Austin. “I was getting paid while listening to the leadership and committee members speak and teach me how to be a powerful union member and stand up for myself and others,” said McFarland.“It filled me with a fury, a passion and a desire to fight harder than I’ve ever fought before. I want to live up to what union membership really means. I want to be the change that I want to see because there’s a difference between thinking or talking about it and being about it,” he said.

“If you are in the factory working at a union shop, you are the union, it’s up to you to be a leader whether you’re participating on a committee across the street at the hall or not. You don’t have to be on a committee to be a part of our union, it’s up to every single one of us to carry that weight together. As soon as you put your weight down and start pointing across the street you become more of the problem instead of being part of the solution and that’s what people don’t understand.”
“Working with Austin has been very rewarding personally,” says Jason Starr, president of Local 249. “Watching him take ownership of his membership and embrace his role as an active UAW member has been impressive. He brings so much energy and passion and is willing to take on any challenge to build the power of our union. This is the spirit of unionism that we are working so hard to identify to secure the future of our great local”.

Austin had some great advice for those thinking about getting involved… “go for it!” says Austin, “Don’t question it, try it. When I started, I thought it was going to be mentally stressful, or tiring especially after working in the plant all day, I didn’t know if it would be for me or not, but it’s been incredibly rewarding. Don’t get me wrong, it’s hard work sometimes but it’s incredibly worth it and not even a fraction of the effort our local deserves”.

On behalf of Local 249, we would like to thank Austin for his passions and efforts. For more information on how you can get involved with a standing committee, visit the Local 249 app to apply online.